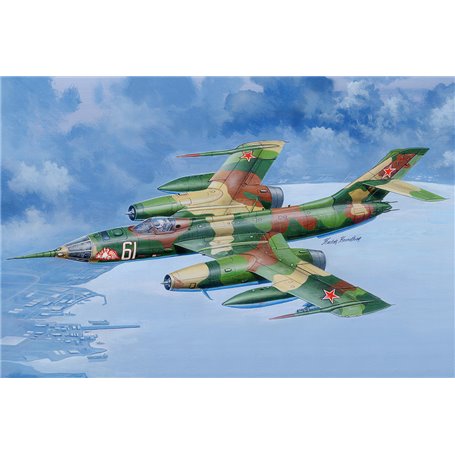 By buying this product you can collect up to 599 points.

The Yak-28P became the dedicated long-range, missile-armed interceptor which could be called upon, in relatively short order, to take on marauding Western bombers or spy planes. The type was born in 1960 and entered service as soon as 1964. These versions lacked the internal bomb bay of their tactical bomber brethren which allowed for more onboard fuel stores to be exercised. An interception radar was standard and fitted in the nose cone assembly while integrated with the aircraft's missile-only payload. Production resulted in 435 aircraft.

The Yak-28P was powered by 2 x Tumansky R-11 series afterburning turbojet engines delivering 10,140lbs on dry thrust and 13,670lbs with afterburning engaged. Maximum speed was 1,140 miles per hour with a range out to 1,550 miles and a service ceiling of 55,000 feet. Armament was generally 2 x R-98M (AA-3 "Anab") medium-ranged, air-to-air missiles and 2 x K-13A (AA-2 "Atoll") short-ranged air-to-air missiles. The aircraft carried a mix of R-98M missiles, typically an infrared homing and a semi-active radar homing version. No internal cannon was fitted.