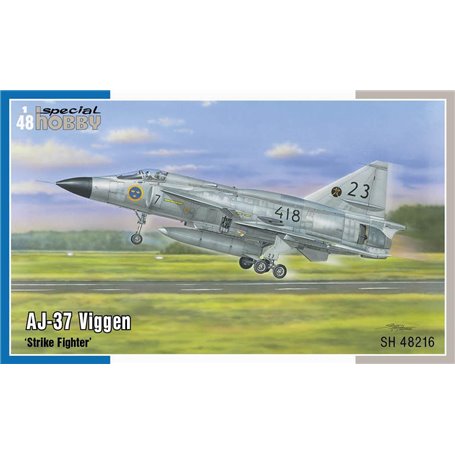 By buying this product you can collect up to 849 points.

The SAAB 37 Viggen was an aircraft well ahead of its time. Unorthodox solutions chosen by its designers not only enabled the type to meet all the requirements, but to even surpass them in a couple of respects.

The power plant used in the airframe was the Volvo RM8, which in fact was a licence-built Pratt & Whitney JT8D airliner turbofan fitted with the afterburner and thrust reverser. This chosen engine, alongside with the unique concept of delta wing and delta-shaped foreplanes gave the airframe  unique capabilities mainly during the take off and langing on short runways.

For better handling in restricted spaces of auxiliary air bases, for easier storage in concrete hardened hangars and to allow better concealment of the aircraft in outside pens, the tail fin was designed as folding. The avionics of the type was the state of the art at that time, the Viggen was the very first fighter jet to be equipped with an integrated circuits computer.

The first of the Viggens to be introduced to service with the Swedish air force was the AJ 37 Vigger, shortly followed by the SK 37 dual control fighter trainer, the SF 37 reconnaissance type with camera carried in the improved nose section and the SH-37 antishipping version with different avionics and specialised air-to-sea armament.

In about ten years time after the first Viggen had entered the service, the second generation of the type came about, the pure fighter JA 37s.

The initial version, which was the ground attack AJ-37, is now the subject of our model kit, which comes on nine styrene sprues joined by a fret of pre-painted etches.

The decal sheet offers markings for three Swedish colour options, one of which flew in natural metal scheme, the other two in typical Swedish splinter scheme.