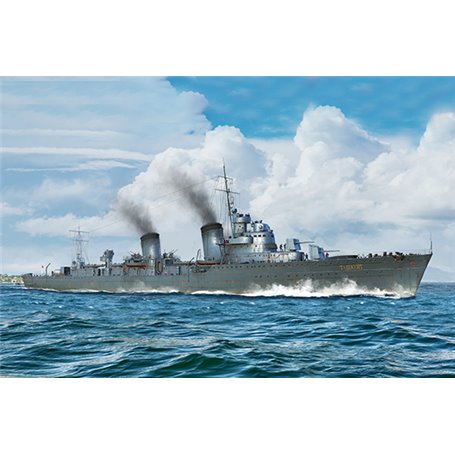 By buying this product you can collect up to 599 points.

Taszkient lead destroyer on January 11, 1935 start of construction in Italy, November 28, 1937 launch, October 22, 1939 the Soviet Union to receive service. Taszkient design avant-garde at the time was an exception, it is one of the few speed can exceed 40 knots large ships during World War II, after the 1942 reform, even up to the light cruiser firepower level.

During World War II, as her main task is to transport people and goods to ship. In Sevastopol transport supplies to Soviet ships, the "Taszkient" was quite legendary, even the Germans know its name, it is surrounded by the Soviets before and after the delivery of supplies to dozens of times, during the German air force was air strikes more than 90 times, the Germans dropped bombs on it to a total of more than 400, a torpedo 10, but it only suffered a proximity bomb.

After the withdrawal of Taszkient Novorossiysk naval base, during an air raid on July 2 in the boat was completely destroyed in the stage, salvaged in 1944, because there was no repair value demolished in 1945.