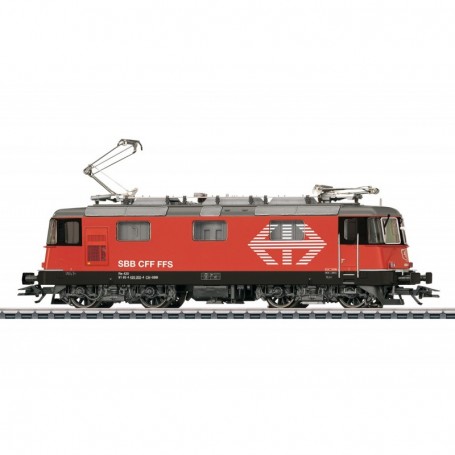 By buying this product you can collect up to 3712 points.

Model: The locomotive has an mfx+ digital decoder and extensive sound functions. It also has controlled high-efficiency propulsion with a flywheel, centrally mounted. 4 axles powered by means of cardan shafts. Traction tires. The triple headlights and 1 white marker light (Swiss headlight / marker light code) change over with the direction of travel, will work in conventional operation, and can be controlled digitally. The light code can be switched to a red marker light when the locomotive is running 'light'. The headlights at Locomotive End 2 and 1 can be turned off separately in digital operation. When the headlights are off at both ends, then the double 'A' light function is on as a red emergency stop light. Long-distance headlights, cab lighting, and engine room lighting can be controlled separately in digital operation. Warm white and red LEDs are used for the lighting. The locomotive has separately applied metal grab irons. The couplers can be replaced by end skirting included with the locomotive. Length over the buffers 17.1 cm / 6-3/4'.

Prototype: Swiss Federal Railways (SBB) class Re 4/4 II electric locomotive as a class Re 420. Rebuilt version as part of the LION modernization project for the Zürich S-Bahn service. 'Fire Red' basic paint scheme. Road number 420 202-4. The locomotive looks as it did around 2019.

A bi-level car set for the Zürich S-Bahn service to go with this locomotive can be found under item number 43574 in the Märklin H0 assortment.

This model can be found in a DC version in the Trix H0 assortment under item number 22849.

First time with a centrally mounted motor and all 4 axles powered by means of cardan shafts.World of Operation mfx+ digital decoder and a variety of extensive light and sound functions included.