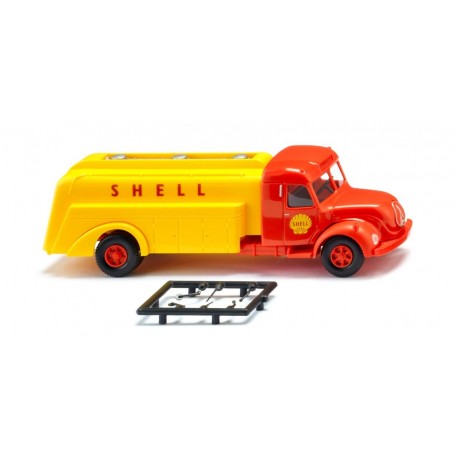 By buying this product you can collect up to 295 points.

This tanker personifies a piece of the automotive culture of the fifties a new addition in 1:87! The real-life sibling of the Magirus S 7500 in its day came with a large drivers cab, which was not uncommon for the tankers used for making deliveries from the depot at the time.

However, the back portion of the driver's cab was primarily used as a convenient can storage cabinet. Brandishing the contemporary colours of the Shell corporation, the Magirus round hood not only hauled the fuel to the filling station but also performed small quantity deliveries to the stations that included oil cans and other small containers.

The superstructure exemplifies tanker construction in the nineteen fifties. Following the approach applied in omnibus manufacturing at the time, the tank superstructure is completely encased, and the area behind the side doors served as storage for hoses and mobile fittings.

The curved fenders are regarded as a throwback to the late thirties when body manufacturers sent the first major lines of tankers out on the road. Running on two axles, the classic tanker was quite manoeuvrable and able to replenish the stocks at the petrol station at any time.

Character of model Typical tanker operating under the Shell banner