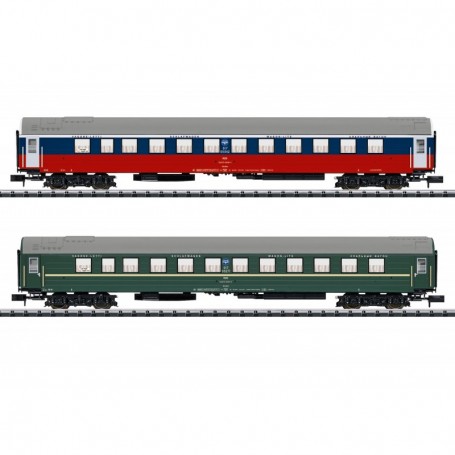 By buying this product you can collect up to 999 points.

Model: The cars have close coupler mechanisms. Lighting kits can be installed in the cars.Total length over the buffers 306 mm / 12-1/16'.

Direct sleeping car trains between Budapest and Venice were available as early as the 19th century. Yet after World War II, this was gone for many years. Possibilities to revive former connections did not arise again until the collapse of the communist regimes in the East Block as well as the break-up of Yugoslavia. At the beginning of the Nineties, the thought thus bore fruit to put in a sleeping car connection again between Budapest and Venice. The first EuroNight 'Venezia' (EN 440/441) to Venice finally left the Budapest stub end station Keleti on May 29, 1994. Despite considerable load factors, the EuroNight 'Venezia' had to be cancelled at the end of the schedule year 2011. The Hungarian rail subsidiary MÁV-START cited as a reason the considerably increased track usage fees from the Italian railroad management. These fees precluded any continued economical operation. The last 'Venezia' thus made its way to Venice on December 9, 2011 and returned to Budapest on December 10, 2011.

The interior lighting to go with these cars:66616 LED Lighting Kit.