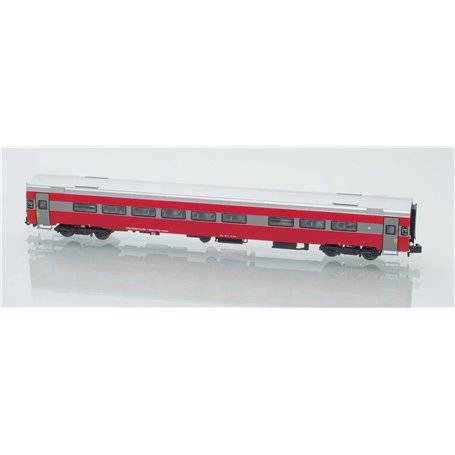 By buying this product you can collect up to 939 points.

For the new express trains on the „Dovre“ line from Oslo to Trondheim, starting in Mai 1982, Norwegian State Railways (NSB) ordered 30 new passenger cars at NEBB in Strømmen in three varieties (2nd class, 1st/2nd class, Bistro/baggage car). The cars were prepared for tilting system which explains their curved side walls to keep the loading gauge. The tiliting system was never in regular service. For these express trains the electric Loco El 17 was ordered, it was built by Henschel in Kassel, Germany.

Through the years the type 7 cars were rebuilt several times and fitted with new seats or new interior, for example with children’s compartment, the 1st/2nd class cars were substituted by 1st class cars.

In the middle oft he 90s new bought electric locos class El 18 from Switzerland (see our models) substituted the El 18. Now it was possible to rise the reliability and to extend these express trains from six to seven cars.

In 2005 NSB launched a new color scheme, named „tomato soup“ by the people. It was also taken for the type 7 cars. The cars were rebuilt again in parallel technically and internally and fitted with new furniture and boxes at the underframe. The cars are still in service in Norway.