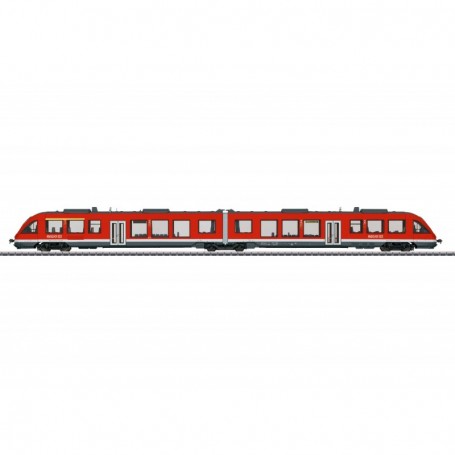 By buying this product you can collect up to 4560 points.

Model: The model has an mfx+ digital decoder and extensive sound functions. It also has controlled high-efficiency propulsion with a flywheel mounted in the Jakobs truck. 2 axles powered. Traction tires. The triple headlights and 2 red marker lights change over with the direction of travel, will work in conventional operation and can be controlled digitally. The headlights at powered rail car ends 2 and 1 can be turned off separately. The powered rail car has a 'Double 'A' Light Function'. The model has factory-installed interior lighting. Maintenance-free, warm white and red LEDs are used for the headlights, marker lights, and interior lighting. The destination displays are prototypically correct with yellow LEDs. The headlights, destination displays, and interior lights will work in conventional operation and can be controlled digitally. The running gear and the body are well detailed. There is a clear view through the windows. The model has a closed diaphragm and a guide mechanism on the Jakobs truck between the two halves of the unit. Center buffer couplers are represented at the ends of the model. Total length approximately 48.1 cm / 18-15/16'.

This model can be found in a DC version in the Trix H0 assortment under item number 22489.