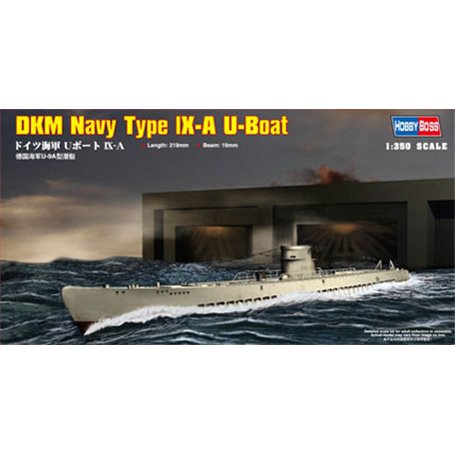 By buying this product you can collect up to 169 points.

Designed in 1935-1936 as large ocean-going U-boats, they were derived from type IA. Diving depth designed as 100m operational and 200m crush depth (many boats went much deeper and survived). Fitted with 6 torpedo tubes below the waterline (4 at the bow and 2 at the stern) they carried 22 torpedoes. They had the same hydroplane and rudder layout as the VIIC. One periscope in the control room (deleted from types IXC onwards) and two in the tower.Type IX had 5 external torpedo containers (3 at the stern and 2 at the bow) which stored 10 additional torpedoes. As mine-layers they could carry 44 TMA or 66 TMB mines. Secondary armament was provided by one large Utof 105/45 gun with about 110 rounds. AA armament differed throughout the war.
Parament