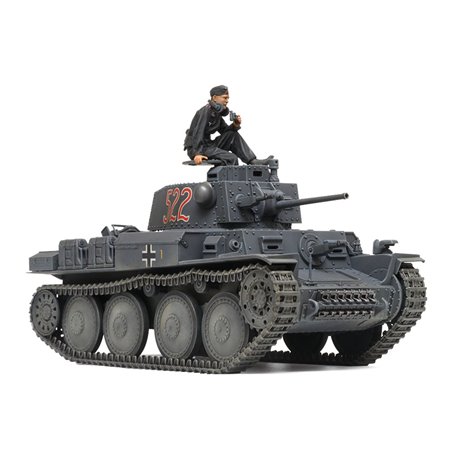 By buying this product you can collect up to 349 points.

A Borrowed Design
After the effective annexation of Czechoslovakia by Nazi Germany in 1939, German forces were interested enough in the native Czech LTvz38 light tank that they took it on and ordered production under their own categorization of 38(t), a light tank with riveted, welded armor and a perky 3.7cm gun. Early production 38(t)s took part in the early German offensives of the war, and the 38(t) underwent continued development with 1,400 produced in total. Ausf.E and F 38(t)s had additional armor across the vehicle for better survivability and were deployed during the early stages of Operation Barbarossa as Nazi Germany once again invaded a neighbor, this time the Soviet Union.

About the Model
★This is a 1/35 scale plastic model assembly kit. Length: 132mm, width: 62mm. ★The 38(t) form with riveted armor plate is accurately depicted.

★Comes with a commander figure for installation in the hatch, and two Eastern Front marking options.

★This kit faithfully captures the form of the compact 38(t), specifically the Ausf.E/F variants used around the time of Operation Barbarossa.

★Marvel at the detail achieved in the depiction of this tank, right down to the miniature rivets. The sight moves in concert with gun elevation.

★Tracks are assembly type with single piece straight sections, not only recreating the form in style but also succinctly capturing upper run 'sag.

★There is plenty to admire on the rear of the model, too, with various accessories recreated and photo-etched engine grille mesh.

★The fenders are also a point of interest, loaded up with stowage boxes sourced by individual units, plus jerry cans and much more.

★Also included in the kit is a full body commander figure for installation in the turret hatch, adding realism with the natural pose.