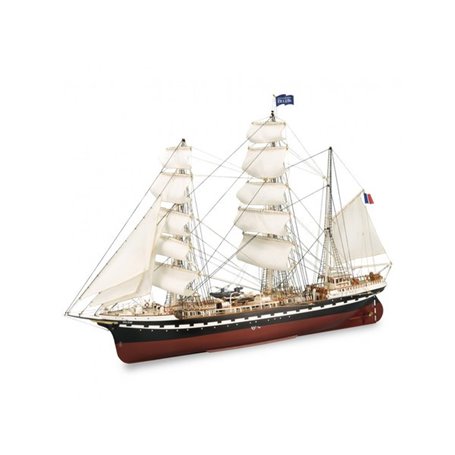 By buying this product you can collect up to 2999 points.

The Belem, launched in 1896, is the last French three-masted ship, the oldest three-masted sailing ship in Europe and the second largest sailboat in France.

The Belem was motorized and renamed for various uses - luxury cruise ship and training ship - and was finally discovered by chance in Venice in a bad state of conservation in the late 1970s by a nostalgic fan. Purchased with the support of a large French bank, which financed the foundation that began its restoration, it offers initiation and discovery courses for enthusiasts, and is intended for the French Navy for the training of his cabin boys, appearing in addition in the great meetings of traditional sailboats.

The Belem received the classification of Historical Monument on February 27, 1984.

The wooden model of the training ship Belem, created by Artesanía Latina, has the formal accreditation of the Belem Foundation that bears the same name.

The modeling kit of this wonderful boat is made of wood, and it also has numerous parts of metal.