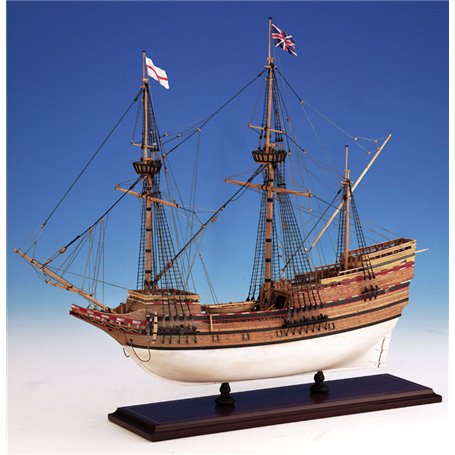 By buying this product you can collect up to 3199 points.

On September 16, 1620, The Mayflower set out from Plymouth, England. Bound for Virginia to establish a permanent colony in North America, she carried 102 men, women and children. Many of the passengers were Separatists fleeing religious persecution in Europe. After two months at sea, the ship dropped anchor at what is now Provincetown, MA. It was almost 200 miles farther north than planned, but winter was approaching, so the Pilgrims decided to stay. Half of the colony did not survive that first winter, but the rest lived on and prospered.

Historians have tried to identify the Mayflower, but all that s certain is that she was a wine-ship of 180 tons of the type commonly used during the early 17th century. In 1957 a British group sponsored the voyage of a replica from Plymouth, England to Plymouth, MA. The vessel was given to the United States as an expression of international goodwill and remains on exhibit at Plymouth, MA.

Model Expo kit is a re-make of the very popular Mayflower manufactured by Model Expo in the late 1950s with a very notable improvement in that the hull is now plank-on-bulkhead. All wooden components have been laser cut. A generous fittings package contains ready-to-use hardwood blocks and deadeyes, precision cast Britannia metal and brass detail parts and five diameters of rigging line. Detailed plans and illustrated assembly instructions make building easy. (Display base and pedestals are not included.)