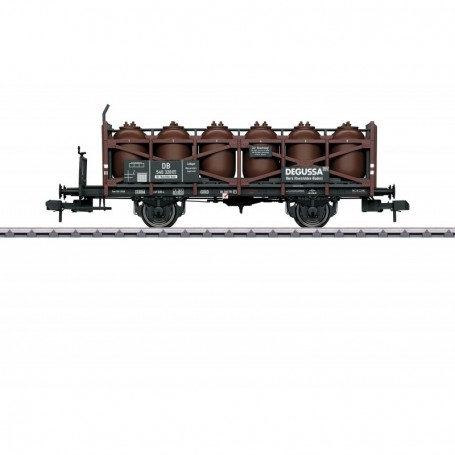 By buying this product you can collect up to 3025 bonuspoints.

Model
The car frame is constructed of metal. The separately applied frame parts and the entire car body with many assembled separately applied parts are made of high quality plastic. The car has detailed, intricate frameworks of braced timbers. The car is loaded with acid containers. Prototype couplers are included. Minimum radius for operation 1,020 mm / 40-3/16'. Length over the buffers 30.6 cm / 12-1/16'.

Prototype
Acid transport car with a brakeman's platform for transporting hydrogen peroxide. Privately owned car painted and lettered for Degussa, used on the German Federal Railroad (DB). The car looks as it did in Era IIIb around 1959. Car number 546 328 P.

The transport of (dangerous) chemicals was among the tasks taken on by railroads early on in the Industrial Age. Hauling corrosive or poisonous substances naturally required special measures. So-called acid transport cars appeared rather early as special