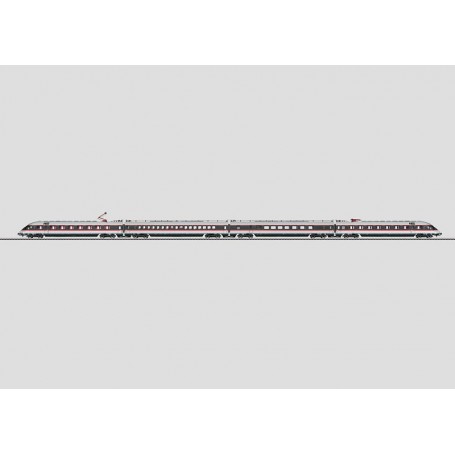 By buying this product you can collect up to 4196 bonuspoints.

SEK5,995.00 -30%
Subscribe To When In Stock
You have successfully subscribed to this product

Model: The model is a 4-part unit. The model has an mfx digital decoder and extensive sound functions. It also has 2 controlled high-efficiency propulsion drives, each with a flywheel, in the open seating intermediate car. Both axles in both trucks are each powered by a motor. Traction tires. The model has factory-installed interior lighting, cab lighting, and lighted table lamps. The triple headlights and red marker lights change over with the direction of travel. They, the interior lighting, and the cab lighting will work in conventional operation and can be controlled digitally. The lighted table lamps can be controlled separately in digital operation; they change between on and off by means of a random generator. The lighting is maintenance-free warm white and red LEDs. The model has special multiple-conductor current-conducting couplings with guide mechanisms between the cars. The model has a power pickup changeover feature with power picked up in the end car at the front of the train. The model has many separately applied details. The roof equipment is finely detailed. The pantographs work mechanically but are not wired to take power. There is a reproduction of a Scharfenberg coupler (non-working) at both ends of the model. Minimum radius for operation is 360 mm / 14-3/16'. Train length over the couplers 118 cm / 46'.

The 37778 electric express powered rail car is being produced in 2012 in a one-time series only for Insider members.

An electric powered rail car train was planned at the end of the Sixties as an alternative to express trains hauled by locomotives. This was done with future new German Federal Railroad routes in mind. The railroad allocated a considerable sum of money for equipment and features for the class 403 powered rail car train that was supposed to replace the diesel powered class 601 Trans Europe Express units. This was done to link top-of-the-line technology with comfort. Three sleek racers were placed into service one after the other starting in 1974. The TEE level of comfort was of course obligatory on these trains: The 403 only had first class seating in compartments and open seating areas, air conditioning, folding-sliding doors, a dining area, and a galley. An absolute highlight: a train secretary's compartment as well as a telephone booth. This train had to score with more than just amenities; it also had to be faster and quieter than the class 601. The engineers were faced with the challenge to design the car bodies with extremely lightweight construction in contrast to classic car construction with steel, the underbody, the body frame, the roof, side and end walls were mostly made of aluminum alloys. This paid off: With only a 16 metric ton axle load and thanks to all-wheel drive, this express powered rail car train accelerated in 100 seconds from zero to 200 km/h / 125 mph. As a rule the train ran at 160 km/h / 100 mph and consisted of two powered end cars (class 403), an intermediate car with an open seating area (class 404.0), and an intermediate car with a dining area and a galley (class 404.1). As 'all-around-talent' the 403 was also suitable for operation in Austria and Switzerland. The pantographs with narrow contact wipers required for operation in Switzerland could be installed on the roofs of the powered end cars. The braking technology consisted of electric resistance brakes, compressed air disk brakes, and magnetic rail brakes, because the ET 403 has to be able to stop in less than 1,700 meters or 5,577 feet from full speed. These trains ran in regular service for three years, but were also used in special service by the German Federal Railroad. The main route was IC Line 4 Munich Nürnberg Bremen. These powered rail car trains were presented by the DB with pleasure as prestige showpieces at trade fairs and special shows. They started their second career in regularly scheduled service from 1982 to 1993 in a special paint scheme as the 'Lufthansa Airport Express'. The smart combination of the latest technology and a futuristic look restored the image of the Intercity. Moreover the 403 marked the third generation of today's ICE powered rail car trains in trend-setting manner.

This model can be found in a DC version in the Trix H0 assortment under item no. 22778 exclusively for Trix Club members.