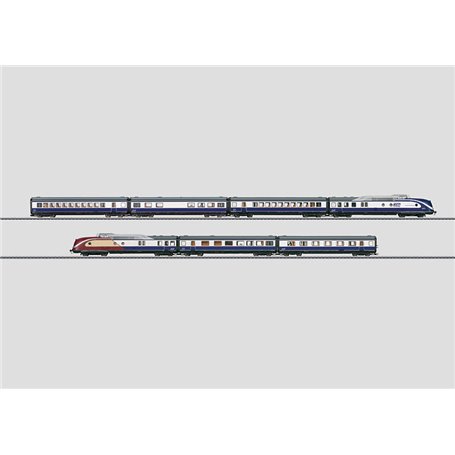 By buying this product you can collect up to 7146 bonuspoints.

SEK10,995.00 -35%
Subscribe To When In Stock
You have successfully subscribed to this product

Model: This is a 7 unit train. It has an mfx digital decoder and extensive sound functions. Each powered end car has controlled high efficiency propulsion. 1 truck powered on both axles for each powered end car. Traction tires. The intermediate cars have factory-installed interior lighting. The triple headlights and dual red marker lights change over with the direction of travel. They along with the interior lighting will work in conventional operation, and can be controlled digitally. The interior lighting and the headlights are maintenance-free warm white LEDs. The power is picked up in the front powered end car, depending on the direction of travel. There are special multi-conductor current-conducting couplings and tightly fitting diaphragms with guide mechanisms between the cars. A reproduction of the closed Scharfenberg coupler (non-working) is at both ends of the train. Train length over the couplers 150.9 cm / 59-3/8'.

The 'Blue Star Train' or 'Probably the Longest Restaurant in the World' Since April of 2006 the former TEE diesel powered rail car train (VT 11 5006, 5015 and intermediate cars) has been located as the so-called 'Blue Star Train' (BST), a stationary restaurant, in the Augsburg railroad park. The earlier history of this former flagship of the German Federal Railroad reads almost like a fairy tale: The Augsburg gastronome Jürgen Drexler discovered the VT 11.5 in 2005 in Bodio in the Ticino region of Switzerland, where the train had been stored since June of 2004 and where it was greatly defaced in the meantime by vandalism and graffiti. After several months of negotiations the firm Eisenbahn­ und Sonderwagen­ Betriebsgesellschaft mbH (ESG) / Railroad and Special Car Operating Company, Inc., with its CEO Jürgen Drexler, succeeded in acquiring the train. The train acquired by ESG is the former IC 'Max Liebermann' that was operated between Hamburg and Berlin under contract by the East German State Railroad (DR) in 1990 after the reunification and that thereby reawakened the TEE mystique. After that the interior of the train was adapted by Rail Italy Srl to the 'Italy Express'. After a further change of ownership to SBB Cargo Italia the train was transferred to Bodio in the Ticino region in June of 2004, where the train was stored until August of 2005. The ESG team was able to restore the VT 11.5 to a presentable state. In Switzerland this train was given the blue/white paint scheme in the old ESG company colors instead of the original red/beige TEE paint scheme. In August of 2005 the ESG was finally able to have the train moved to Augsburg. Since this 'Swiss' VT 11.5 only had seven intermediate cars, the search was on for additional cars to augment the train and to provide more efficient operations. ESG found intermediate cars stored at the DB maintenance facility in Kassel and acquired them from the railroad. In Augsburg the individual former TEE powered rail car train end units and intermediate cars were examined in the fall of 2005 to determine which parts could still be used for the subsequent conversion. In the spring of 2006 restoration and conversion work was finished and an exclusive, operational restaurant train with the 'dignified luxury' and the flair of the old TEE was the result. At the start of February 2010 the powered end car VT 11 5006 for the 'Blue Star Train' was repainted in its front area in the classic TEE colors of red/beige and had the original TEE emblem applied to the nose. In contrast a BST logo in the style of the TEE emblem is mounted on the other powered end car. With this 'exclusive' paint scheme the ESG is documenting impressively in the TEE anniversary year its close link to the 50 year old history of its train. It is in any event the first and only TEE powered rail car train in private hands and at the same time the only one painted in other than the original TEE colors.