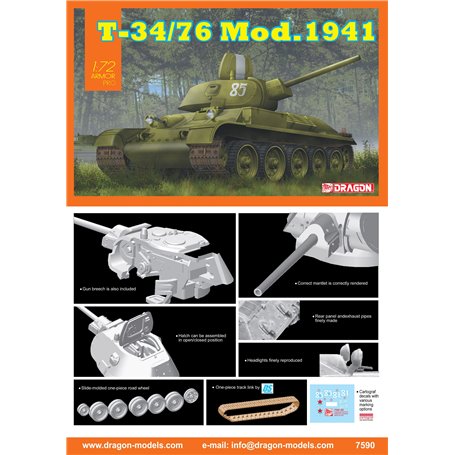 By buying this product you can collect up to 239 bonuspoints.

The T-34, the mainstay tank of the Red Army during WWII, has been described as the most important weapon that helped Russia win the war in the East. Certainly it was the most widely produced tank of the war, and as can be expected, a number of variants appeared during its lifetime. The most important improvement on Mod.1941 was the longer-barrelled F-34 76.2mm gun. Many components were put under scrutiny for mass production, like the gun mount, the welded turret with a new, single, wide hatch, and many other parts. Now Dragon is going to re-launch this T-34/76 Mod.1941 in new 1/72 Armor Pro series.