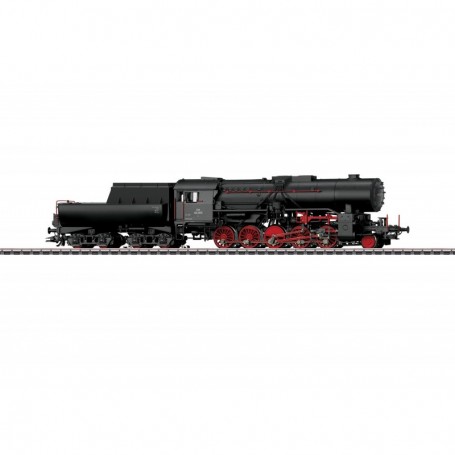 Model
The locomotive has an mfx+ digital decoder and extensive sound functions. It also has controlled high-efficiency propulsion with a flywheel, mounted in the boiler. 5 axles powered. Traction tires. The locomotive and the tub-style tender are constructed mostly of metal. A 7226 smoke unit can be installed in the locomotive. The double headlights change over with the direction of travel. They and the smoke unit that can be installed in the locomotive will work in conventional operation and can be controlled digitally. The cab lighting can be controlled in digital operation. Maintenance-free warm white LEDs are used for the lighting. There is a close coupling with a guide mechanism between the locomotive and tender. The rear of the tender and the front of the locomotive have close couplers with NEM pockets and guide mechanisms. The minimum radius for operation is 360 mm / 14-3/16'. Protective piston sleeves, brake hoses, and imitation prototype couplers are included.Length over the buffers 26.4 cm / 10-3/8'.

Prototype
Austrian Federal Railways (ÖBB) class 42 heavy steam freight locomotive with a type 2´2´T30 tub-style tender. Without smoke deflectors, pilot truck wheel set with solid wheels, rail clearance devices with large scoops, both lower headlights in the front of the locomotive built into the cylinder block. With added boards on the coalbunker on the tender. The locomotive looks as it did in the Fifties.

Class 42 Heavy Steam Freight LocomotiveIn World War II there was already discussion in 1941 about a wartime steam locomotive with an 18 metric ton axle load, the boiler of the class 44, and the running gear of the class 50 for use on lines in the Eastern March (Austria) and the occupied areas in Russia. Two projects were finally favored from the 20 project suggestions for this so-called 'Third Wartime Steam Locomotive' (KDL 3). After that, 8,000 units (a little later reduced to 5,000) were to be built of the class 42. Finally, the 'Design' steering committee determined the following quantities
2,500 locomotives with a stay bolt boiler and a bar frame, 1,150 locomotives with a Brotan boiler and a sheet metal frame, and 650 locomotives with a Brotan boiler and a condensation tender. Henschel delivered the first two units in 1943 with a Brotan boiler and the road numbers 42 0001 and 42 0002. Schwartzkopff built the first locomotive with a stay bolt boiler in 1944 as road number 42 501. The class 42 units were a completely new design compared to the predecessor class 52 wartime locomotives derived from the class 50. Externally they had the simple construction of the wartime locomotives with an enclosed cab and only one side window, simple Degenkolb smoke deflectors, and solid wheels on the pilot truck. Yet they offered a striking appearance with the lanterns built into the cylinder block and the short running boards falling to the cylinders. The dome arrangement and the dome sheathing was also unusual.The originally planned quantities were not achieved because of the war. The industry delivered all total 865 of these 80 km/h / 50 mph fast and approximately 1,800 horsepower units. Subsequent production after World War II in Poland and Vienna-Floridsdorf increased the quantity in the end to 1,063 units. In the western zones, there were still 701 locomotives left, many of them not operational however. The DB distanced itself rather quickly from them. The last was put into storage on March 27, 1956. Yet with the incorporation of Saarland in 1957, class 42 units came back to the DB roster. Up until October of 1962, they were used mostly in the greater Saarbrücken area to pull ore trains and in heavy pusher service. In the neighboring country of Luxembourg road number 5519 (planned as 42 2718, built in 1948 in Vienna-Floridsdorf) is still in existence as the last operational unit of this class and it is used for special runs under steam.

This model can be found in a DC version in the Trix H0 assortment under item number 22229 with a 21-pin digital interface connector and under 22345 with a digital decoder and sound.

Prototypical tooling changes for the version as an Austrian locomotive.Rail clearance devices with large scoops.Especially finely modelled metal construction.mfx+ World of Operation digital decoder and a variety of operation and sound functions included.

The class 42 wartime locomotives remaining on the ÖBB after the end of World War II formed an indispensable component in the transport of heavy freight. Fifty-one units turned in marvelous results pulling heavy freight trains on the Semmering line, sometimes in double-heading operation or also as pulling and pushing locomotives. Progressive electrification made the mighty class 42 units superfluous, and in 1966, the last unit was removed from service. Road number 42 2708 remains preserved and can be found at the Strasshof Railroad Museum near Vienna. 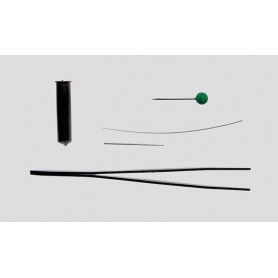