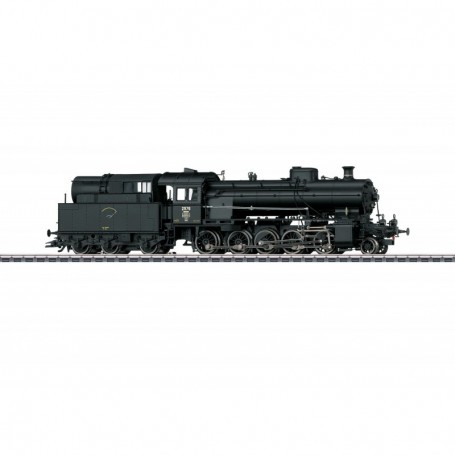 Model
The locomotive has an mfx+ digital decoder and extensive sound functions. It also has controlled high-efficiency propulsion with a flywheel, mounted in the boiler. 5 axles powered. Traction tires. The locomotive and tender are constructed chiefly of metal. The locomotive has a factory-installed 72270 smoke unit. The triple headlights on the locomotive and 2 lights on the tender change over with the direction of travel. They and the built-in smoke unit will work in conventional operation and can be controlled digitally. The cab lighting can also be controlled digitally. Maintenance-free, warm white LEDs are used for the lighting. There is an adjustable coupling with a guide mechanism between the locomotive and tender. The front of the locomotive has an NEM pocket and a close coupler. The rear of the tender has an NEM pocket, a close coupler, and a guide mechanism. The minimum radius for operation is 360 mm / 14-3/16'. Piston rod protection sleeves and imitation prototype couplers are included. Length over the buffers 22.3 cm / 8-3/4'.

Prototype
Swiss Federal Railways (SBB) class C 5/6 'Elephant' steam freight locomotive, with a 3-axle tender and conversion to oil firing. Locomotive road number 2976. The locomotive looks as it did in the Fifties.

SBB Class C 5/6 Steam Locomotive, Road Number 2976, with Oil FiringAfter the Swiss Federal Railways (SBB) took over the Gotthard Line in 1909, it quickly became apparent that locomotives had to be acquired with greater performance in order to make operations on the steep grades on the Gotthard and the approach lines on flat territory more efficient. In addition to serving as motive power for freight locomotives, these locomotives also had to be capable of pulling express trains on the steep grades, which required a maximum speed of 65 km/h / 41 mph in addition to high pulling power.The two prototypes, road numbers 2901 and 2902, of the class C 5/6 were available for testing as early as 1913. They were equipped with four-cylinder running gear and simple expansion, which did not turn out particularly well. On the regular production locomotives, recourse was therefore made to the good experiences with the running gear for the C 4/5 locomotives in the series 270132 and four-cylinder compound running gear based on 'Von-Borries' was installed. Between 1913 and 1917, 28 regular production units were placed into service with the road numbers 2951-2978, whereby road number 2978 was also the last standard gauge steam locomotive delivered to the SBB.However as early as 1921, these units (immediately designated as 'Elephants') became superfluous with the complete electrification of the Gotthard Line, and they were transferred to flat territory as well as to large switchyards. Even though Swiss steam operation had lost importance due to the rapid electrification of the main lines, there was still experiments with oil firing on steam locomotives to save fuel and realize simpler operation. The designer Edwin Sprenger from Goldau patented such a setup and in the Thirties, he tested it on an SBB Ec 3/5. In 1952, Sprenger asked the SBB again whether he could install his improved oil firing on a C 5/6 and test it in operation. The SBB agreed and the C 5/6, road number 2976, was selected. Shortly before this, it had been overhauled internally with the replacement of the firebox tube wall and was now ready to run trouble-free. The first official test run with a freight train took place on December 3, 1953 between Erstfeld and Aarau and the results were encouraging. The oil consumption was significantly less than coal firing. Initially, the locomotive was run with heating oil, which was carried in a 4,000 liter / 1,057 gallon tank in the tender. Later, the tank volume was increased to 7,000 liters / 1,849 gallons and a steam heating system was installed so that the unit could be fired with cheaper heavy oil. Despite the good results with the 'Oilephant', the SBB showed little interest in converting other locomotives. In December of 1962, the C 5/6, road number 2976, was 'mothballed' in Erstfeld and it was no longer put into operation. After its official retirement at the end of March 1965, it was then quickly scrapped.

This model can be found in a DC version in the Trix H0 assortment under item number 22926.

The most powerful SBB steam locomotive, with the nickname 'Elephant'.The only locomotive of this class converted to oil firing.Prototypical tooling changes including an oil tank on the tender.Cab lighting can also be controlled digitally.Factory-installed smoke unit.Digital decoder and extensive operation and sound functions included.World of Operation mfx+ digital decoder and extensive operating and sound functions included.

There were oil-fired steam locomotives even in Switzerland. At the end of 1953, the 'Oilephant' the converted class C 5/6 'Elephant', road number 2976, first began running. With oil firing based on the Sprenger system, this unit quickly showed its advantages compared to coal-fired locomotives. Demonstrably lower fuel consumption as well as simpler operation and trouble-free adaptation to different load relationships had the experts' attention. The foreseeable discontinuation of steam locomotives on the SBB then resulted unfortunately in no more conversions. 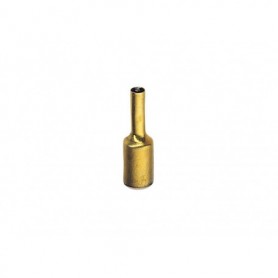