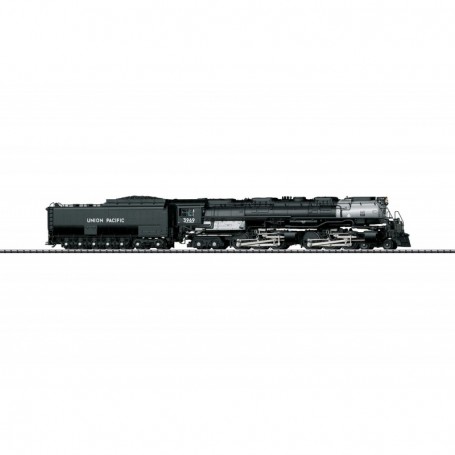 Model
The locomotive has a digital decoder and extensive sound functions. Different operation sounds such as coal and water being replenished or the sounds of opening and closing the sliding windows and the ventilation hatch on the cab can be controlled digitally. The locomotive also has controlled high-efficiency propulsion with a flywheel, mounted in the boiler. 6 axles powered. Traction tires. The locomotive has an articulated frame enabling it to negotiate sharp curves. It also has Boxpok driving wheels. The headlight, backup light on the tender, and the number board and marker lights are maintenance-free, warm white LEDs. 2 smoke generators (7226) can be installed in the locomotive, the contacts for them are on constantly. The headlight, backup light on the tender, and the contact for the smoke unit will work in conventional operation and can be controlled digitally. The cab lighting and the number board and marker lights can be controlled separately in digital operation. There is a powerful speaker in the tender. An imitation coupler in a standard pocket can be mounted on the pilot at the front of the locomotive. There is a close coupling with a guide mechanism between the locomotive and tender. Steam lines on the front group of driving wheels are mounted to swing out and back with the cylinders. The locomotive has separately applied metal grab irons. There are many other separately applied details. Figures of a locomotive engineer and fireman for the engineer's cab are included. Length over the couplers 42.5 cm / 16-3/4'.The locomotive comes in a wooden case.

Prototype
Union Pacific Railroad (UP) class 3900 'Challenger' heavy American freight steam locomotive, with a coal tender. Locomotive road number 3969. The locomotive looks as it did in the Fifties.

The Union Pacific 'Challenger'The 'Challenger' type steam locomotives celebrated their hour of birth on the Union Pacific Railroad (UP). In the Mid-Thirties, UP chief engineer Arthur H. Fetter and Otto Jabelmann (UP superintendent for locomotives) realized that the existing steam locomotives could not haul heavier trainloads at higher speeds. Freight service was to be accelerated chiefly on the 0.82% grades in Wyoming. The two UP engineers developed an articulated locomotive with a 4-6-6-4 wheel arrangement in cooperation with American Locomotive Company (ALCO). In fact, it followed the Mallet design but did not work with the compound principle. The Challenger worked with simple expansion on each set of driving wheels. The first prototype with road number 3900 went into operation on August 25, 1936 in Council Bluffs, Iowa. This locomotive had the newest steam locomotive technology of that time, including roller bearings on all of the pilot and trailing truck wheels and on the tender wheels, a generously dimensioned boiler, as well as a combustion chamber adapted accordingly to the locomotive. With a maximum speed of 70 mph (112.65 km/h) it had the following main data
boiler pressure 17.93 atmospheres / 263.50 pounds per square inch, four cylinders (558.8 x 812.8 mm / 22' x 32'), driving wheel diameter 1,752.6 mm / 69' (Boxpok wheels), grate surface 10.05 square meters / 108.18 square feet, heating surface 499 square meters / 5,371.19 square feet, super heater 151.1 square meters / 1,626.43 square feet, locomotive weight 256.5 metric tons, adhesion weight 175 metric tons, semi-Vanderbilt tender with two three-axle trucks.Its first proving test was on the point of a heavy freight train from Ogden (Utah) to Green River (Wyoming) while mastering the grades of the Wasatch Mountains. In order to test the performance of this unit, the UP officials decided to have the locomotive run without additional locomotive support. Road number 3900 did this run with flying colors and Fetter thus declared that the new design had 'met the challenge'. The name 'Challenger' stuck for the locomotive. By 1937 the UP placed 40 units in three production groups into service with the numbers 3900-3939 (from 1944 on: 3800-3839), in which road numbers 3934-3939 were converted to oil firing right after being delivered and others followed in the next few years.From 1942-1944 the UP added 65 'Challengers' (3930-3949, 3950-3969, and 3975-3999) to its roster. With many improvements taken from the 'Big Boys' (such as more powerful boiler, roller bearings on all wheel sets, a larger cab) they were now designated as 'heavy' Challengers compared to the 'light' Challengers from the years 1936/37. In 1945, road numbers 3975-3984 were converted to oil firing, in 1952 road numbers 3930/31/32/34/37/38/43/44 followed. In the same year, they were given new road numbers 37003707, while road numbers 39753984 became 37083717.In the beginning the Challengers pulled chiefly freight trains over the grades on the Wasatch Mountains and Sherman Hill, but after the still more powerful Big Boys were placed into service, they were seen on the entire UP system in California, Nebraska, Oregon, Utah, and Wyoming. In addition, they were also used for a time to pull passenger trains such as the 'Challenger Streamliners' of the same name between Chicago and California. With faster conversion to diesel power after World War II, the last 'Challengers' were taken out of service in 1959. Just two remained preserved: road number 3977 as a memorial in North Platte (Nebraska) and road number 3985, also converted to oil firing as a UP museum locomotive.

Notes for operating this locomotive
The locomotive can be used on curved track with a radius of 360 mm / 14-3/16' or more, however we recommend larger radii. Due to the overhang of the long boiler, signals, catenary masts, bridge railings, tunnel portals, etc. must be installed for sufficient clearance on curves. The track must be well mounted due to the heavy weight of the locomotive. The locomotive can only be run through a turntable or transfer table. Products bearing 'Union Pacific' are made under trademark license from the Union Pacific Railroad Company.

This model can be found in an AC version in the Märklin H0 assortment under item number 39912.