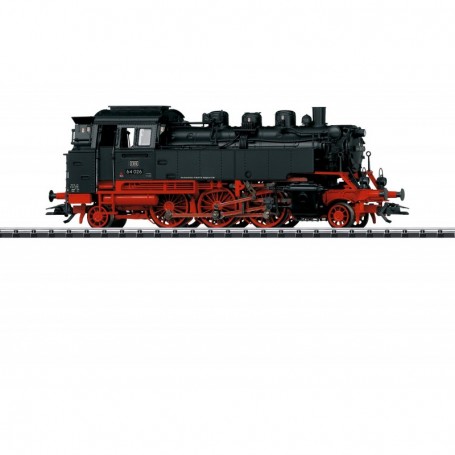 Model
The locomotive has a DCC/mfx digital decoder and extensive sound functions. It also has controlled high-efficiency propulsion. 3 axles powered. Traction tires. A 72270 smoke unit can be installed in the locomotive. Triple headlights change over with the direction of travel. They and the smoke unit contact will work in conventional operation and can be controlled digitally. Maintenance-free, warm white LEDs are used for the lighting. Brake hose detail parts and piston rod protection sleeves are included. Length over the buffers 14.3 cm / 5-5/8'.

Prototype
German Federal Railroad (DB) class 64 passenger tank locomotive. Version with riveted water tanks. Road number 64 026. This locomotive was built in 1927 by Henschel. It was stationed from May of 1936 to July of 1963 continuously at Gemünden, where it was also retired on March 10, 1965. The locomotive looks as it did around 1960.

This locomotive can be found in the Märklin H0 program under item number 39658.

Motive Power from the Upper Palatinate