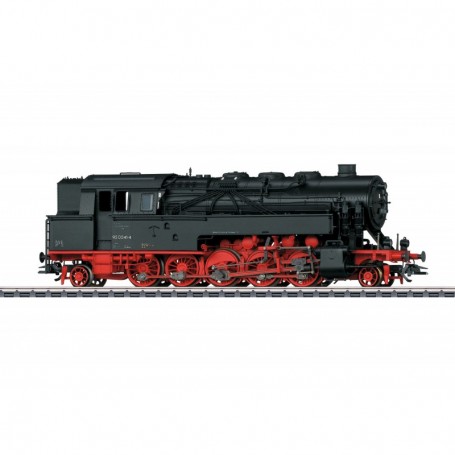 Model: The locomotive has an mfx+ digital decoder and extensive sound functions. It also has controlled high-efficiency propulsion with a flywheel, mounted in the boiler. 5 axles powered. Traction tires. The locomotive is constructed chiefly of metal. The triple headlights change over with the direction of travel. They and the smoke unit contact will work in conventional operation and can be controlled digitally. In addition, the cab lighting can be controlled digitally. Maintenance-free, warm white LEDs are used for the lighting. There is a close coupler with an NEM pocket and a guide mechanism at both ends of the locomotive. The minimum radius for operation is 360 mm / 14-3/16'. Piston rod protection sleeves and brake hoses are included. Length over the buffers approximately 17.5 cm / 6-7/8'.

Class 95.0 Oil Freight Train Steam Tank LocomotiveAfter successful use of the 'Animal Class' tank locomotives (DR 95.66) by the Halberstadt-Blankenburg Railroad (HBE) on its steep route the Rübeland Line, the (Prussian) central railroad office in Berlin a

A passenger car set to go with this locomotive is being offered under item number 43147.

This model can be found in a DC version in the Trix H0 assortment under item number 25097.