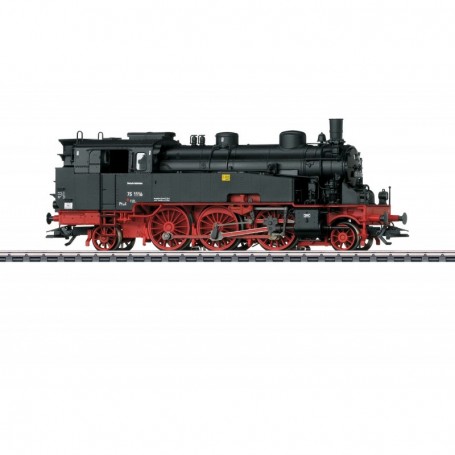 Model: The locomotive has an mfx+ digital decoder and extensive sound functions. It also has controlled high-efficiency propulsion with a flywheel, mounted in the boiler. 3 axles powered. Traction tires. The locomotive is constructed largely of metal. The locomotive has a factory-installed smoke unit. The dual headlights change over with the direction of travel. They and the built-in smoke unit will work in conventional operation and can be controlled digitally. Maintenance-free warm white LEDs are used for lighting. The locomotive has numerous separately applied metal grab irons and lines. The minimum radius for operation is 360 mm / 14-3/16'. Protective piston rod sleeves and brake hoses are included. Length over the buffers 14.6 cm / 5-3/4'.

Road number 75 1116 was built in 1921 under builder number 2148 by the Karlsruhe Machinery Production Company. The original Baden road number was VIc 1120.The locomotive was based from 1949 to 1969 in Bautzen. It was retired at the Bautzen maintenance fac

A passenger car set to go with this locomotive is offered in the Märklin H0 assortment under item number 46395.

This model can be found in a DC version in the Trix H0 assortment under item number 22792.