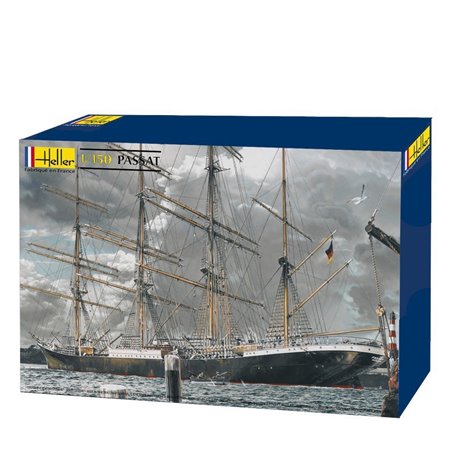 By multiplying the commercial speed records, the Hamburg-based shipping company, Ferdinand Laeisz, where the name of every building begins with a P, has become world-famous under the name « Flying P.Line ». Ordered at the beginning of 1911, the great 4-mast sailing ship “Passat” left Hamburg on 24 December for its first voyage to Chile via Cape-Horn. From 1911 to 1914, the “Passat” made 4 voyages to Chile. It was during its fifth voyage that the World War I broke out. The Passat was in Yquiqui port, in the region of Atacama, in Peru and would stay there until 27 May 1921. Given to France as a war indemnity, the Laisz company bought it back on 22 December 1921 and after being completely revised it resumed its voyages around Cape Horn. The “Passat” went on its final voyage in 1957. In 1959, the Hanseatic city of Lübeck bought the “Passat” for 315,000 DM, and after undergoing massive transformation work, it was placed at the disposal of the sailors’ school of Schleswig-Holstein. The “Passat” has not set sail since 1966. It is available for lessons given by French Ministry of Youth and Sport and for international youth encounters.