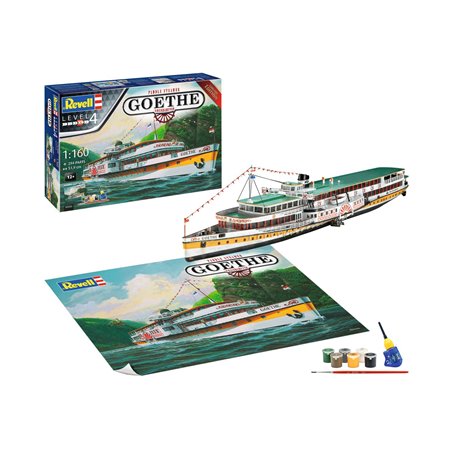 Nostalgia or the fashionable longing for the past is not the only explanation for the popularity of the paddle steamer. The ride on board this classic car conveys direct contact with technology by the hissing of the outflowing steamship, the clapping sound of the immersing wheel blades or the view of the enormous, swinging connecting rods. As early as 1900, a large fleet of so-called saloon steamers with luxurious interiors was on the Rhine. The Goethe was built in 1913 at the Gebrüder Sachsenberg shipyard in Cologne-Deutz and was intended for the combined transport of goods and passengers. Since then, the semi-saloon freighter has been equipped with a two-cylinder composite steam engine with valve control, which has a performance potential of 700 hp and transmits its power to two paddle wheels with 8 iron blades each. In 1925, the Goethe was converted into a double-deck saloon steamer. It was sunk by a bomb hit on 3.3.1945 at Oberwinter and rebuilt in 1951/52 at the Ruthof shipyard in Mainz-Kastel. Based on the old engine, a new ship was built, which was extended by 5 m to 83 m and can now carry 1600 passengers. The speed downstream is 25 km/h, upstream 16 km/h. The speed is 25 km/h. As the only steamboat of the KD (Köln-Düsseldorfer Deutsche Rheinschifffahrt AG), the Goethe was for a long time regularly operating on the 198 km long Rhine route between Cologne and Mainz.