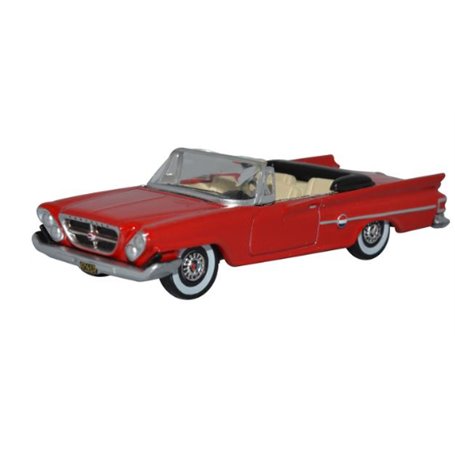 The Chrysler 300 series were luxury high performance American cars produced over 10 years from 1955 to 1965. Assembled in Los Angeles, California, the Chrysler 300 – said to be the origin of the US ‘muscle cars’ of the era, had rear wheel drive and a front engine. Our model is tooled on the 1961 variation which featured inward sloping headlights and the grille, which previously had been narrower at the top than the bottom was now inverted.  The front bumpers were also revamped and now appeared turned up at the ends. The gearbox was either three speed manual or three speed automatic.

The car came as either a two door coupe? or two door convertible and Oxfords model, the Chrysler 300 appears in convertible mode in bright red with contrasting silver trim and whitewall tyre.  The interior has light ivory seating with a black floor. The car is registered 4756 ED NY Empire State 61 – to one upmarket owner, no doubt!