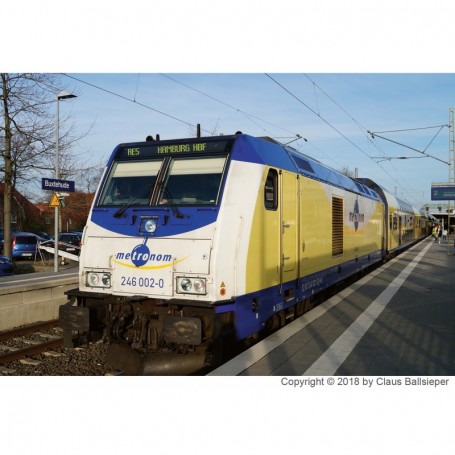 Model
The locomotive has a built-in digital decoder and sound generator for operation with DCC, Selectrix, and Selectrix 2. The motor has a flywheel. 4 axles powered. Traction tires. The headlights and marker lights change over with the direction of travel. The locomotive has a close coupler mechanism. The headlights, marker lights, cab lighting, long-distance headlights, and many other sound functions can be controlled digitally. The fuel tank is now correctly reproduced in die-cast zinc. Length over the buffers 118 mm / 4-5/8'.

TRAXX Locomotives.Locomotives from the TRAXX (Transnational Railway Applications with eXtreme fleXibility) family built by Bombardier are in operation everywhere in Europe today. In 1994, the AEG experimental 12X locomotive appeared, which then underwent testing as road no. 128 001 on the DB. The real success story began in 2000 however. Bombardier introduced the multiple system version
The class 185 was also designed for the power current systems of neighboring railroads. A total of 400 units of the class 185 were to be purchased. Depending on the country they will be used in, the locomotives are being equipped with the correct train safety systems and with electrical equipment as a 'package'. There are thus locomotives with two or four pantographs and different contact wiper widths as the most noticeable external differences. There are also many class 185.1 locomotives on private railroads. There is a class 146.1 160 km/h / 100 mph fast version of this locomotive for commuter service. The TRAXX family locomotives delivered starting in 2005 formed the next evolutionary step on European railroads: They were equipped with locomotive bodies with improved ability to withstand crashes, the shape of these locomotive bodies looks more powerful and brawnier at the ends. Other changes have to do with the electrical rectifier layout. Railion is presently putting 200 of these locomotives into service as the class 185.2. There is also a commuter service version of this locomotive for 160 km/h / 100 mph, the class 146.2. The German Railroad, Inc. is not the only eager buyer of this family of locomotives with an eye for the future. The SBB and many privately owned railroads such as the Swiss Crossrail are placing different models of the various series into service. The TRAXX 2E type program as the current evolutionary step now also enables a diesel electric TRAXX version that shares essential components with the earlier electrical versions. The privately owned railroads are the pioneers for the use of these diesel locomotives. The TRAXX DE locomotive is being used on the HVLE as the class 285 in freight service, but it is also being used on the 'metronom' Railroad Company LLC as the class 246 pulling bi-level passenger trains on non-electrified routes.

Comfortable and Punctual to Your Destination