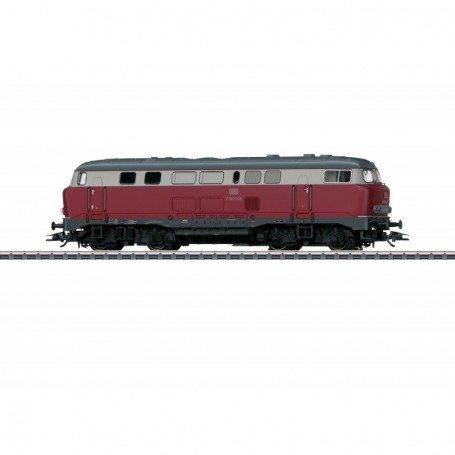 Model: The locomotive has an mfx+ digital decoder and extensive sound functions. The locomotive also has controlled high-efficiency propulsion with a flywheel, centrally mounted. All 4 axles powered by means of cardan shafts. Traction tires. The triple headlights and dual red marker lights change over with the direction of travel, will work in conventional operation, and can be controlled digitally. The headlights at Locomotive End 2 and 1 can be turned off separately in digital operation. When the headlights at both ends are turned off, then the 'Double 'A' Light' function is on at both ends. Maintenance-free warm white and red LEDs are used for the lighting. Metal grab irons are separately applied on the sides and ends. The locomotive has detailed buffer beams. Brake hoses that can be mounted on the locomotive are included. Length over the buffers approximately 18.4 cm / 7-1/4'.

Prototype: German Federal Railroad (DB) class V 160 'Lollo' general-purpose locomotive in the pre-production version. Paint scheme for the prototype series. The sides of the locomotive have different arrangements of vents and windows. Road number V 160 006. The locomotive looks as it did in 1961.

In 1956, the German Federal Railroad's central office in Munich reached agreement with the locomotive builder Krupp in Essen on the development of a single-motor general-purpose diesel locomotive. The original plan was for a unit with a nominal performanc

This model can be found in a DC version in the Trix H0 assortment under item number 22162.