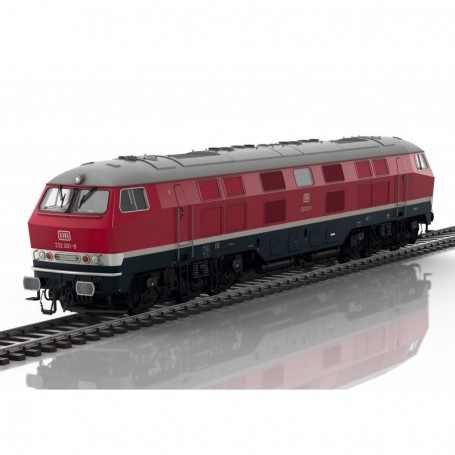 Model: This locomotive is completely new tooling. The running gear with the main frame and locomotive body are constructed of metal. The locomotive has many separately applied brass parts and separately applied metal parts such as grab irons, metal signs, windshield wipers, etc. The locomotive has a DCC-Digital decoder, extensive sound functions as well as running sounds that vary with the speed, a locomotive whistle, warning horn, compressed air being released, vent sounds, and much more. The locomotive can be operated with AC, DC, Märklin Digital, and MFX. The locomotive has a built-in buffer capacitor, whose parameters can be adjusted. It also has two high-efficiency motors with drive to all axles and a high level of pulling power. The LED white headlights / red marker lights change over with the direction of travel, will work in conventional operation, and can be controlled digitally. There is white LED lighting in the cab that changes over with the direction of travel and that can be turned off. All of the vents include sound. They are prototypically driven and can be turned off. There is smoke exhaust from all of the exhaust stacks and it can be controlled electrically. The engine room lighting / corridor lighting can be controlled. The engine room and cab interior details are modelled. The cab doors can be opened, and Cab 1 has a figure of an engineer. The buffer beams have sprung buffers and separately applied brake lines. There is a factory-installed, electrically working Telex coupler at the back of the locomotive. The front has a prototype coupler. Each factory-installed type of coupler can be replaced by the other type, which is included with the locomotive. Gloves are included with the locomotive.Minimum radius for operation 1,020 mm / 40-3/16'. Length over the buffers 71.9 cm / 28-5/16'.Weight approximately 7 kilograms / 15 pounds.

Prototype: Diesel locomotive, road number 232 001 (Henschel DH 4000). German Federal Railroad (DB) lease locomotive in the crimson paint scheme of Era IV. The locomotive looks as it did around 1972, period of use at Kempten. With metering boxes on the trucks to the right rear and left rear, without rain gutters above the cab windows.

As early as 1956, the firm Henschel began at its own cost design and construction in cooperation with the DB's central office in Munich of what is still the largest and most powerful diesel hydraulic locomotive in Europe. Henschel was able to reach back t

The Giant after the Change to Computer Numbering

With the introduction of computer road numbers, road number V 320 001 mutated starting January 1, 1968 to road number 232 001. Starting in the fall of 1971, it had to do freight train service after the end of its use in heavy express train service. This w