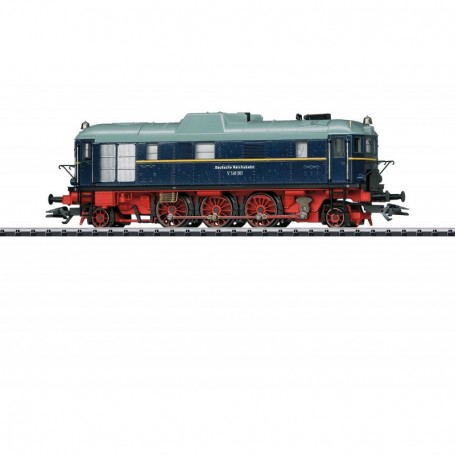 Model: The locomotive has an mfx digital decoder and extensive light and sound functions. It also has controlled high-efficiency propulsion with a flywheel. 3 axles powered through side rods. Traction tires. Triple headlights and dual red marker lights change over with the direction of travel, will work in conventional operation, and can be controlled digitally. The headlights at Locomotive End 2 and 1 can be turned off separately in digital operation. The locomotive has the double 'A' light function. The cab lighting can be turned off separately in digital operation. Maintenance-free, warm white and red LEDs are used for the lighting. Length over the buffers 16.5 cm / 6-1/2'.

22404 Diesel Locomotive V 140 001At the start of the Thirties, hydraulic transmissions had proven successful on small locomotives and powered rail cars. The Voith-Föttinger hydraulic transmission had matured significantly since then and offered several advantages, and large diesel motors had achieved a satisfactory level of development. At the end of 1934, the German State Railroad therefore decided on the construction of the first large diesel locomotive in the world powered hydraulically, under the leadership of Krauss-Maffei. The entire project had a small snag however, because the locomotive was supposed to be completed by the beginning of the exhibition '100 Years of German Railroading' in mid-July of 1935. There were thus only eight months of construction time available. Despite many problems, an exemplary contribution by all parties involved resulted in successful delivery on time of the diesel locomotive initially designated V 16 101 and running under its own power to the Nürnberg exhibition.After that, there were various tests scheduled and in test runs, the locomotive left the performance of steam locomotives such as the Prussian P 8 somewhat in the dust. Final acceptance by the DRG took place in 1936. Then, this unit ran in the Munich area and was reclassed according to its design as V 140 001. After a successful probation period, the German State Railroad proudly presented it in 1937 at the Paris World Exhibition. It was awarded a 'Grand Prix' there as an excellent engineering achievement of its time. World War II interrupted further development of powerful diesel locomotives and put road number V 140 001 into storage.Yet after the end of the war, the great interest on the part of the occupation forces in technical innovations in Germany caused a resurrection of the locomotive that had suffered damage in the war. Krauss-Maffei took on the overhaul and added small improvements. At the end of 1947 / beginning of 1948 new test runs took place. After that V 140 001 was now in a wine red paint scheme and was stationed at Frankfurt-Griesheim available for scheduled use. Up to its final storage in December of 1952, it recorded at least about 130,000 kilometers / 81,250 miles in express, fast train, and passenger train service to Nürnberg, Heidelberg, and Fulda.A main inspection, its lone wolf status, increasing difficulty in procuring spare parts, and delivery of new diesel locomotives led to the retirement on October 13, 1953 of the ancestor of all hydraulic diesel locomotives. As a pioneering design and pointing the way for the construction of large locomotives, it did not end up on the scrap heap, but was preserved and has been available for admiring since 2006 at the branch of the German National Museum in Munich at the roundhouse for 'Lokwelt Freilassing' / 'Freilassing Locomotive World'.

Glossy paint scheme.First time to include a 'World of Operation' mfx decoder and extensive light and sound functions.