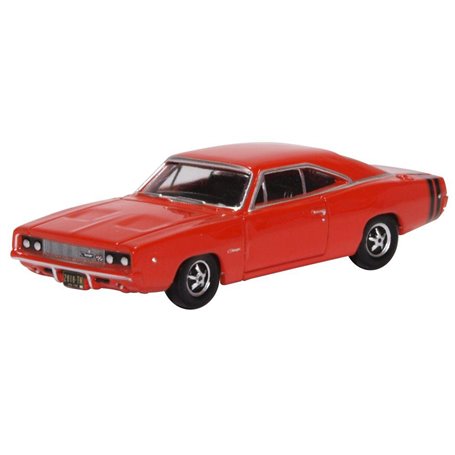 Dodge Charger from 1968, arguably the most famous in the Charger series.  It was the chosen vehicle for films too - notably Bullitt and starred as the General Lee in the TV series Dukes of Hazzard.

The Dodge Charger was originally introduced in 1966 with a two door fastback body shape, three speed floor-mounted gearbox and a 5.2 litre V8 engine.  Sales figures were disappointing so in 1968 it was upgraded with cosmetic differences to both the interior and exterior. These included an undivided radiator grille, rounded tail lights and integrated  headlights.  The revised car proved very popular and although this second generation Charger was only made between 1968 and 1970, over 96,000 were sold. Our model appears in bright red with silver trim and two black stripes running up the rear sides and right across the boot.  Registered 2818 TN New York, the interior of our two-door model is black.

The car was superseded in 1969 by the Dodge Charger Daytona, which also makes its debut as an Oxford model in this issue.