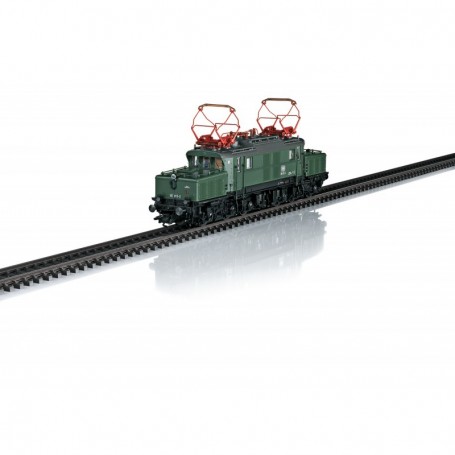 Electric Locomotive Class E 93 (193)The 18 units of the class E 93 led a rather inconspicuous existence for many years in the Swabian part of Germany. It is easy to overlook that the E 93 was a trailblazing new development specially designed for the requirements of the Württemberg main line Stuttgart Ulm that was operated electrically beginning June 1, 1933. Its designers had especially to take into account mastering the Geislingen Grade with appropriate loads. The E 93 thus formed the first German 'Crocodile' with its half high hoods borrowing from the prototype of Swiss electric locomotives and it was also the ancestor of an entire generation of six-axle electric locomotives without pilot trucks for heavy freight service. When it was purchased, the time was close to trying out the design principles of the class E 44 on a six-axle freight locomotive close-coupled trucks without pilot trucks, bridge frames, and axle-suspended propulsion. In the design of the E 93, particular value was laid on cost reduction. Compared to its predecessors it was possible to simplify the electrical equipment radically and welding technology was used extensively for the mechanical parts. The three-axle trucks had to be designed carefully in order to guarantee good running on curves. The flanges on the center driving wheel sets were reduced by 10 mm / about 3/8' to reduce wear on the rails. In addition, equalizing bars in conjunction with the close coupling between the trucks were intended to eliminate easing the load on the rear wheel sets when starting up. The so-called start up lamp was also important here. This was located initially on the engineer's side of each cab. It served chiefly as a motion monitor, particularly on difficult nighttime startups. Much damage and the lack of spare parts led to them being removed starting in 1967 and they were replaced by a new lamp under the cab next to the steps up to the cab.In 1933, AEG delivered the first two units as road numbers E 93 01-02 to the maintenance facility at Kornwestheim. They fulfilled completely their intended operation program that stipulated among other things hauling 1,600 metric ton trains on 0.5% grades at 60 km/h / 37.5 mph. Even 1,200 metric tons could be hauled over the Geislingen Grade with a pusher locomotive. Two more units (E 93 03-04) did not follow until 1935. With the maximum speed increased to 70 km/h / 43.75 mph, road numbers E 93 05-18 appeared in 1937/39, and then the more powerful E 94 provided the succession. All 18 units survived the war with some damage and were restored. In the first postwar years, most of the E 93 units were based at the maintenance facility at Ulm for long runs between Kornwestheim and Munich. By the spring of 1951, some of these locomotives were racking up over 13,000 km / 8,125 miles per month. By May of 1951, almost all of the locomotives then landed back at the maintenance facility at Kornwestheim. In addition to pusher service on the Geislingen Grade, the E 93 units (starting in 1968
193) chiefly took care of freight service in the area of the Stuttgart 'Church Tower'. The first unit to be retired in January of 1977 was road number 193 010. The chapter was closed with the withdrawal from service of road numbers 193 004 and 006 in January of 1985. Road numbers 193 008 (KKW Neckarwestheim) and 012 (privately owned in Ettlingen) remain preserved in addition to the DB Museum locomotive 193 007 (Museum Maintenance Facility at Koblenz-Lützel).

Heavy-duty flat cars with different freight loads to go with this locomotive can also be found in the märklin H0 assortment under item number 48695.

This model can be found in a DC version in the Trix H0 assortment under item number 22872.