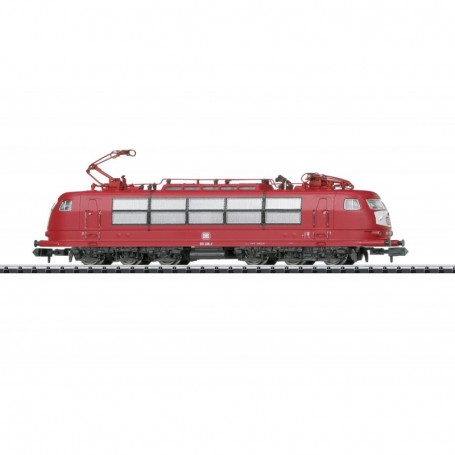 Model
The locomotive has a built-in digital decoder and sound generator for operation with DCC and Selectrix. The motor has a flywheel. 4 axles powered. Traction tires. The headlights and marker lights change over with the direction of travel and can be controlled digitally. Warm white LEDs are used for this lighting and there is cab lighting and engine room lighting. All of the lighting can be controlled digitally. The locomotive has a close coupler mechanism. It also has separately applied grab irons. Length over the buffers 126 mm / 4-15/16'.

The DB introduced a new train system for long-distance service on September 25, 1988 under the brand designation 'InterRegio' (IR). It was intended to replace the 'D-Zug' express trains of that time that ran in individual schedules. Regions and medium sized cities were to be linked to the long-distance network in two-hour schedules with fixed operational routes and modern, comfortable rolling stock. The IR was intended to form a useful supplement and expansion of the existing systems beneath the supplemental fare networks of the InterCity (IC) and EuroCity (EC) and (starting in 1991) the InterCity Express (ICE) with direct connections at 'System and Junction Stations'. Analog to the IC trains, the block formation was used again on these dual-class trains with updated rolling stock, whereby the Bistro car separated the two car classes.The first to go into operation daily with eight pairs of trains was IR Line 12 between Hamburg and Kassel. These trains were pulled by the DB's parade horses â the class 103.1 six-axle classy racers based at the Hamburg-Eidelstedt maintenance facility. Between 1969 and 1974, 145 of these powerful units with road numbers 103 101-245 were added to the DB roster. They were designed and built from the start for a speed of up to 265 km/h / 165.63 mph but they were allowed a maximum of 200 km/h / 125 mph. The class 103 units with their elegant streamlined shape and the Siemens rubber ring spring cardan shaft drive were the most powerful German electric locomotive and had an hourly performance of 7,780 kilowatts / 10,581 horsepower.'Orient Red' locomotives were planned exclusively as motive power for the trains formed completely of new, white-blue IR cars. This was to satisfy the corporate identity. By 1997, 84 units fell into the 'Orient Red' paint pot. With delivery of the first regular production class 101 units in the fall of 1997, the class 103.1 units disappeared increasingly from IC service and larger waves of retirement lapped up around them. The last domain for these former classy racers was built around the IR service and their scheduled use was actually supposed to end in December of 2001. The high level of damage on the classes 101 and 112.1 forced the railroad to recall the already written off class 103.1 for a new long-term expansion on a large scale in the summer of 2001. One more time the last of the 'Mohicans' were pulling IR trains, which showed what was still in them after 30 years of bone grinding work. Nothing lasts forever and all planned use of the class 103.1 units ended on December 14, 2002.