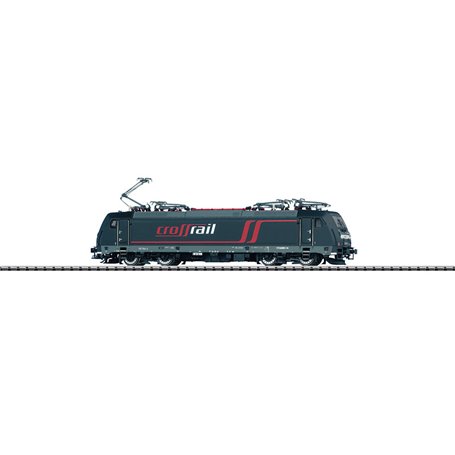 Prototype: Class 185.5 electric locomotive painted and lettered for the Swiss firm Crossrail. Built starting in 2005 by Bombardier as a regular production locomotive from the TRAXX type program. Road no. 185 564-2. Use: Freight service.

Era V. The locomotive frame is die-cast metal. The locomotive has a 21-pin digital connector. It also has a 5-pole motor with a skewed armature and a flywheel, centrally mounted. 4 axles powered through cardan shafts. The headlights are maintenance-free, warm white LEDs, and they will work in conventional operation. The lighted train destination sign can be controlled together with the headlights. A set of lettering with different train destinations is included with the locomotive. The headlights can be turned off in digital operation at the end of the locomotive with Cab 1 or 2. The grab irons and many other details are separately applied. The locomotive has detailed roof equipment. The engineer's cabs have interior details, and there is a figure of engineer in the front cab. The locomotive has NEM coupler pockets with a guide mechanism. Brake hoses in a long and a short version and buffer beam details are included in a bag. Length over the buffers 217.2 mm / 8-9/16".

TRAXX FROM TRIX Locomotives from the TRAXX type family built by Bombardier are in operation everywhere in Europe today. In 1994, the AEG experimental 12X locomotive appeared, which then underwent testing as road no. 128 001 on the DB. The knowledge gained from this went into the development of the class 145, which was placed into service on the DB starting in 1998 as a freight locomotive with a maximum speed of 140 km/h / 88 mph. Eighty locomotives were built for the DB and additional units for the Swiss Mittelthurgau Railroad, which were used in the end on the SBB as the class Re 481. There are several other class 145 locomotives on privately owned railroads. The class 146.0 for commuter service was derived from the class 145; the most noticeable feature of the former is the train destination sign on the end of the locomotive. The class 146.0 is designed for 160 km/h / 100 mph and also has a time-multiplex push/pull train control system. The real success story began in 2000 however. Bombardier introduced the multiple system version: The class 185 was also designed for the power current systems of neighboring railroads. A total of 400 units of the class 185 are to be purchased. Depending on the country they will be used in, the locomotives are being equipped with the correct train safety systems and with electrical equipment as a "package". So, there are locomotives with two or four pantographs and different contact wiper widths as the most noticeable external difference. There are also many class 185.1 locomotives on private railroads. And, there is a class 146.1 160 km/h / 100 mph fast version of this locomotive for commuter service. The TRAXX family locomotives delivered starting in 2005 formed the next evolutionary step on European railroads: They were equipped with locomotive bodies with improved ability to withstand crashes; the shape of these locomotive bodies looks more powerful and brawnier at the ends. Other changes have to do with the electrical rectifier layout. Railion is presently putting 200 of these locomotives into service as the class 185.2. There is also a commuter service version of this locomotive for 160 km/h / 100 mph, the class 146.2. These locomotives are currently being used as motive power for the latest bi-level trains in the areas of Stuttgart, Freiburg, and Nürnberg. The new Trix models are reproductions of these latest versions of the locomotives on the German Railroad, Inc. The development of the TRAXX locomotives is continuing in the prototype; you will continue to hear a lot from Trix about these locomotives translated uncompromisingly into 1/87 scale ....