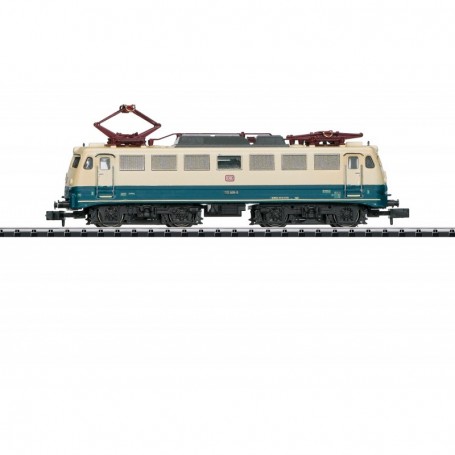 Model
The locomotive has a built-in digital decoder for operation with DCC and Selectrix. It also has a motor with a flywheel. 4 axles powered. Traction tires. The headlights and marker lights change over with the direction of travel. Warm white LEDs are used for the lighting. The locomotive has a close coupler mechanism. The locomotive is typical for units rebuilt in Era IV with non-streamlined buffer beams, individual vents on the sides, and altered rain gutters.Length over the buffers 103 mm / 4-1/16'.

The DB standard type program for electric locomotives laid down in 1954 foresaw the use of the class E 10 in express and fast train service. These regular production locomotives were capable of 150 km/h / 94 mph and were designed to pull 500 metric ton express trains up 0.5% grades at 140 km/h / 87 mph. In October of 1954, the DB ordered the first units designated as the class E 10.1. Krauss-Maffei was responsible for the mechanical part of the design and SSW did the electrical part. Henschel, Krupp, AEG, and BBC also participated in the building of the locomotives. On December 4, 1956, the DB the first regular production unit as road number E 10 101. By 1963 another 286 units had followed it (E 10 101-264, E 10 271-287). Starting in October of 1962 the DB placed road numbers E 10 1265-1270 in service as motive power for the flagship train 'Rheingold'. Thanks to a gear change, they were capable of 160 km/h / 100 mph. The streamlined body with the characteristic 'Bügelfalte' / 'Pants Crease' on the ends used for the first time on these locomotives was applied starting in 1963 to all class E 10 units. Locomotives designed this way formed the sub-class E 10.3. The first regular production unit with the pants crease was road number E 10 288. The six Rheingold E 10.12 units were followed in 1964 by five more locomotives, road numbers E 10 1308-1312. The last series of 160 km/h / 100 mph units were delivered as early as 1968 as road numbers 112 485-504. The DB took delivery of 379 regular production units of the classes E 10.1/E 10.3 as well as 31 units of the class E 10.12.Girder-built underframe and a superstructure framework of steel shapes were a welded design on which the outer 'skin' of sheet metal pieces were welded. The outer skin together with a girder-built underframe and roof construction formed a self-supporting unit. The four traction motors provided 3,620 kilowatts / 4,854 horsepower. The SSW rubber ring spring drive was used as a drive system. The pantographs were newly developed and were given the designation DBS 54a. Over time, the appearance of most units changed due to numerous rebuilding projects. All that can be mentioned is the removal of the skirting (E 10.3), the conversion of the vents, the removal of roof gutters, and much more.In the course of their service lives, the paint schemes for the locomotives and quite often their class numbers changed. Road numbers 112 485-504 thus became 114 485-504 in 1988 and starting in 1991 road numbers 110 485-504. The rest of the class 112 units ran as the class 113 starting in 1992. Starting in 2005 several class 110 units were transferred from DB Regio to DB Auto Train (dissolved in September of 2013 and transferred to DB Long Distance Service) and run there as the class 115. The last class 110 units were pushed to the side in February of 2014 and only nine class 115 units are still running, among them five 'Pants Creases'.

Digital sound with many functions.