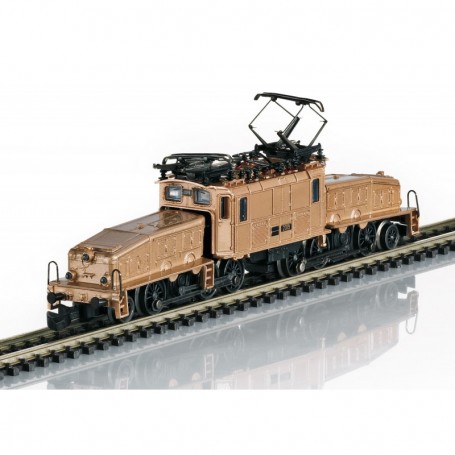 Model
The hoods and locomotive body are constructed of real die-cast bronze and have a transparent protective paint job. The locomotive has a finely balanced color design with bronze and black tones. It has a motor with a bell-shaped armature and LED lighting with the Swiss headlight / marker light code. Both trucks powered. The locomotive has reduced lettering for the benefit of the bronze look. Length over the buffers 91 mm / 3-9/16'. The locomotive comes in special fine packaging.

Prototype
SBB Historic class Ce 6/8 III, road number 14305, as it looked before 2017. The prototype is still currently operational on the roster of SBB Historic at Erstfeld, Switzerland.

One-time series for the anniversary '100 Years of the Crocodile'.

From the Märklin Z Manufacturer Model Bronze Investment Casting Edition.One-time bronze edition for the anniversary '100 Years of the Crocodile' .Motor with a bell-shaped armature.