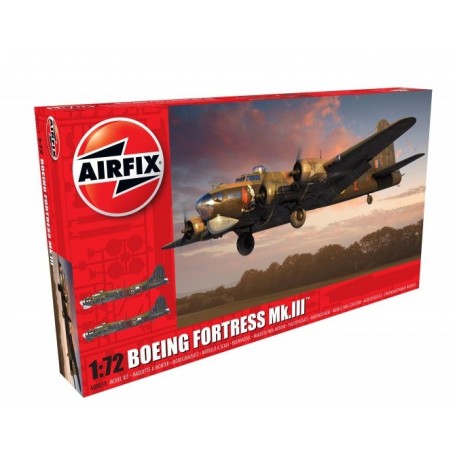 In RAF service, the definitive Boeing B-17G was known as the Fortress III, with 85 aircraft being supplied to the British. Operating mainly in the bomber support role, these aircraft would conduct anti-radar and clandestine operations, designed to confuse and frustrate German nightfighters, allowing more Allied bombers to return unscathed from their latest raid.

The Boeing B-17 Flying Fortress four engine bomber was an airborne manifestation of American military might in the Second World War. Operating in massed formations, these distinctive aircraft were designed to conduct daylight precision bombing missions, against strategic enemy targets, with the ultimate aim of literally pounding them into submission. As its name suggests, the Flying Fortress was bristling with defensive armament and it was intended that formations of B-17s could throw so much lead into the air, that any attacking enemy aircraft would either be shot down, or simply fly away from their certain demise although this thinking did not actually materialise in combat, it did help to give the B-17 a fearsome reputation.

The B-17 also saw service with the Royal Air Force during WWII, mainly operating anti-submarine patrols with Coastal Command, but also in a much more covert role. The Fortress Mk.III aircraft of No.100 Group Bomber Command would fly anti-radar and bomber support missions, designed to confuse and disrupt German night defences and allow Allied bombers a greater chance of returning safely from their latest mission. Flying towards decoy targets and dropping paper strips coated in aluminium known as window to interfere with German radar, these RAF Fortress Mk.III bombers attempted blind the Luftwaffe nighfighter force and dramatically reduce its ability to intercept Allied bombers.