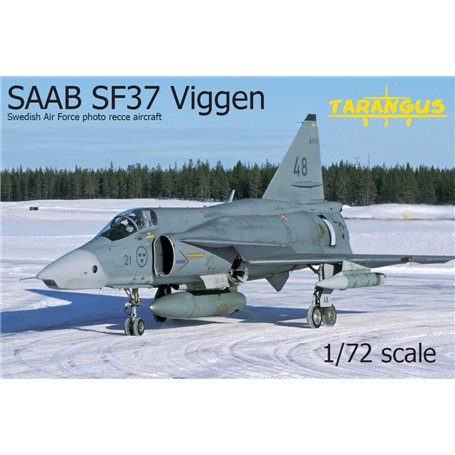 The photo recce version of Viggen can be built in three liveries. SF37 is equipped with cameras in the nose.

One decal version for gray/gray livery and two with the splinter camo.

The Saab 37 Viggen took to the skies for the first time on February 8th, 1967, in the hands of test pilot Erik Dahlström. However, the first studies that lead to the Viggen were conducted as early as 1952.
The Swedish Air Force (Flygvapnet) needed a replacement for its Lansens and Drakens, which at the time yet had to enter service. The aim was to produce a multirole fighter able to replace all different aircraft types in the inventory.
The Swedish strategy was at the time based on dispersion of the aircraft and this meant that the new fighter had to be able to take off and land on 800m long strips of roads. Combined with requirements for high speed and good performance at all altitudes meant that Saab had to choose an unconventional design.
A large delta wing provided good performance at high speeds and a canard wing provided positive lift which ensured good low speed handling.
The Viggen was powered by a single Volvo Flygmotor RM8, an engine developed from the civilian Pratt & Whitney JT8D. In order to ensure short landing distances, the aircraft was also equipped with a thrust reverser, enabling the Viggen to reverse on the ground.
Even though the Viggen was heavily promoted to other countries during the 1970s, including a version called the Saab 37 Viggen “Eurofighter” for the joint purchase of fighters for Norway, Denmark, Belgium and the Netherlands, it failed to have any export success. The Flygvapnet remained the only operator of the Viggen until the types retirement in 2007.
The Viggen was also developed in two reconnaissance versions, the SH 37 and the SF 37.
The SF 37 was a photo reconnaissance platform, with seven different cameras able to take pictures in both daylight and at night. In order to accommodate the camera suite, the radar was deleted and instead
it received a different nose to house the cameras. 28 aircraft were delivered between 1977 and 1980.
The recce Viggens were modified during the 1990s to the AJS standard, which gave the aircraft the possibility to perform some attack and fighter missions. In this guise, the AJSF 37 was selected for the Swedish Rapid Reaction Force (SWAFRAP) and received a new paint scheme (similar to the JA 37 Viggen fighter) and all titles in English.
The aircraft served with the wings F10 in Ängelholm, F13 Norrköping, F17 Ronneby and F21 in Luleå.