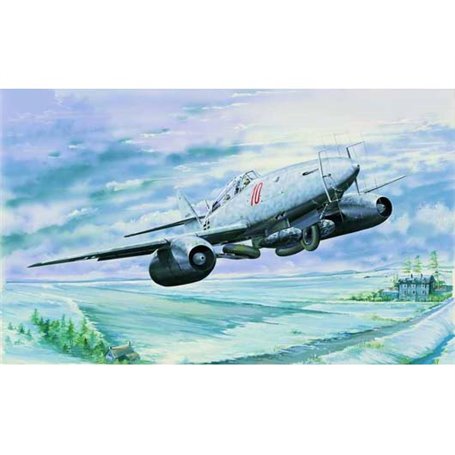 The Me262 was the first and only fully operational jet-powered fighter aircraft developed during World War II. Because of the special handling characteristics of a jet-powered aircraft verses a propeller driven one, a two seat training conversion became necessary. This was designated the Me262B-1a, and was equipped with a second seat for the instructor along with full dual controls, and a pair of external fuel tanks. The need for the night fighter version out weighed the extra time it took to complete the modifications, so therefore it was decided to simply adopt the trainer version by adding the FuG218 Neptun radar system and the FuG350 Naxos heat sensing unit, which allowed the fighter to track the exhaust of the British planes. This was designated the Me262B-1a/U1, and the first of these aircraft were delivered to the experimental night fighting unit Kommando Welter during February - March of 1945. This unit served in the defense of Berlin and became NJG11, but by the end of the war, they had only received a dozen of these new jet aircraft