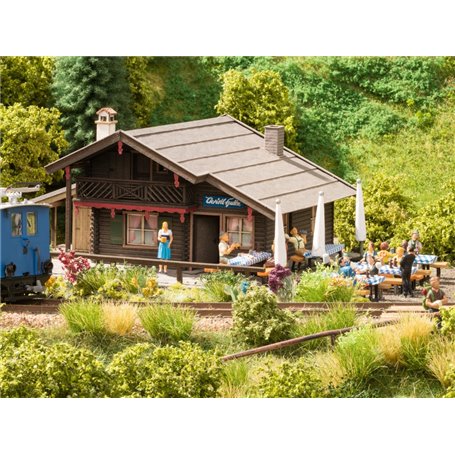 The Zugspitze Arena – Then, as Now, a Fascinating World!

The Alpine Hut “Christl” is located right on the route of the Bavarian Zugspitze Railway between Grainau and Eibsee. It was built around 1900 as a hunting lodge. The lodge was in operation from about 1951, making it a popular destination for tourists and locals. The beer garden was much-frequented! A special feature is the rack railway route, which leads directly in front of the house: when the route was driven by the first generation of electric locos, they drove so slowly at this point due to the massive incline that the Alpine Hut “Christl” could serve beer to the loco driver on his way through. The “empties” were then returned on the way back. Unthinkable today for safety reasons, the locomotive drivers defied all odds in the summer and the winter by taking tourists towards Eibsee and following on to the Zugspitze, Germany’s highest mountain peak.

Although the lodge is still standing today, it has not been running since the 1970s. The model kit contains a servo as well as electronics that control operation of the waitress and are ready to be connected. She comes out of the lodge, runs along the tracks and disappears back inside the lodge after briefly handing over a beer. A real highlight of your model railway layout!

The model is limited to 1,000 pieces. Includes a numbered certificate and detailed instructions.