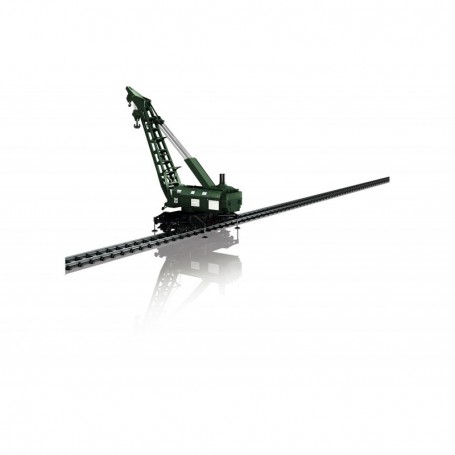 Model
The crane car has a digital decoder and sound functions. The crane superstructure with its boom can be rotated 360Â° on the gear ring. The boom can be raised and lowered by means of a pulley. The main hook made of metal can be raised and lowered by means of a pulley. The crane cab lighting can be controlled digitally. Two floodlights on the boom can be controlled digitally. LEDs are used for the lighting. The crane car has a built-in smoke unit that can be controlled digitally. 4 support arms can be swung out manually and they can be positioned with spindles on the bases included with the crane car. The smoke stack with a smoke hood can be removed or installed. A counterweight made of metal can be partially removed and placed on the buffer attachment. The crane car has a 6-axle car frame and a crane housing constructed of metal. There is a stake car (converted from a type Rms Stuttgart car) with a guide block as a crane tender car. A former Association Design type G car with end area reinforcement and without a hand brake functions as an equipment car. The minimum radius for operation is 437.5 mm / 17-1/4'! Total length over the buffers approximately 146 cm / 57-1/2'.

Prototype
German Federal Railroad (DB) 6-axle railroad rotary crane car with Ardelt system steam propulsion with a lifting capacity of 57 metric tons, with a crane tender car (converted from a type Rms Stuttgart car) and an equipment car. 'Bottle Green' paint scheme for the steam crane. Road number 'München 6664'. The cars look as they did around 1958.

This model can be found in an AC version in the Märklin H0 assortment under item number 49570.