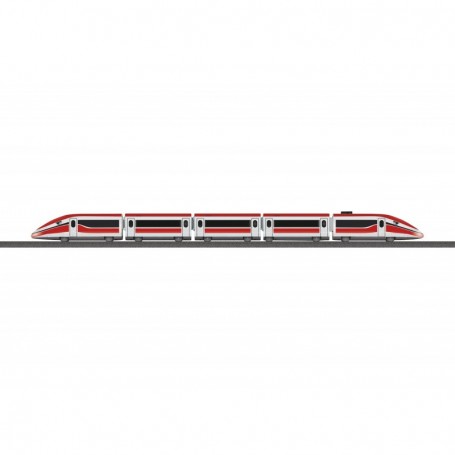 Model
The train has a battery-powered drive and magnetic couplers between the individual cars. There is also a permanently coupled unit consisting of a powered end car and a passenger car with a built-in battery holder. The train has 3 speed levels in both forward and reverse, 3 sound functions, and dual headlights. Train length 63 cm / 24-13/16'.Contents: The set has 11 sections of curved plastic track, 7 sections of straight plastic track (172 mm / 6-3/4'), 5 sections of straight plastic track (188 mm / 7-13/32'), 2 sections of curved plastic track (turnout curve), and 1 left turnout and 1 right turnout. An easy-to-use wireless märklin Power Control Stick is included and a rerailer as well as 4 x AA and 2 AAA batteries are included with this set. The train can be operated with 2 different frequencies thus allowing another battery-powered train to be operated with this set at the same time. This set can be expanded with the 23300 plastic track extension set.

Battery powered train with light and sound functions.The infrared märklin Power Control Stick is designed to be held easily by children. Connecting cars together is as easy as child's play with the magnet couplers.Very suitable toy train for children ages 3 and up.Sturdy plastic track designed for quick setup and takedown even on the floor.Batteries and a rerailer included.