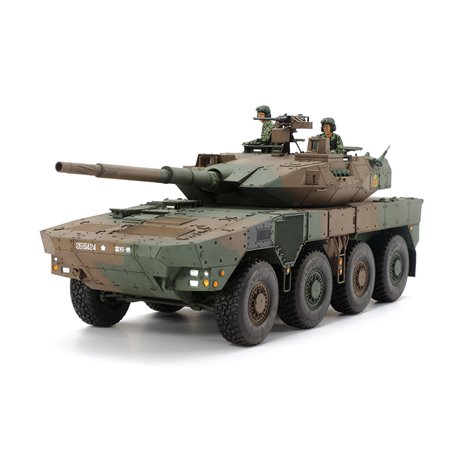 On the Cutting Edge
Japan Ground Self-Defense Force units began receiving the eight-wheel Type 16 Maneuver Combat Vehicle in 2017; it is expected to form a central part of the Rapid Deployment Regiments called for in a mobile Japanese defense policy. It certainly fits the bill, with a top speed of 100km/h thanks to a 570hp engine, and can utilize public highways as well as being airlifted. The distinctively modern turret is equipped with spaced armor and a domestically designed L/52 105mm rifled gun, working in conjunction with an advanced fire control system.

?This accurate rendering of the Type 16 is based on extensive research of the actual vehicle.

?Clear parts are used for lenses, periscope and more.