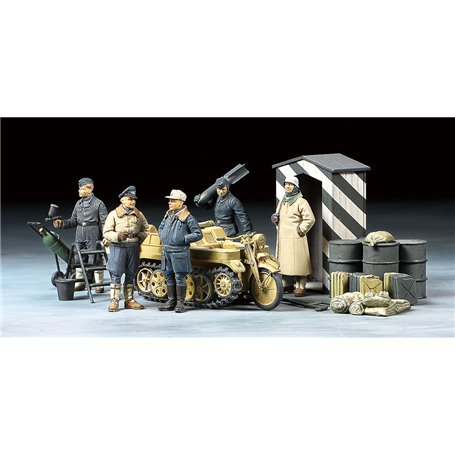 About Luftwaffe Winter Uniform
German troops were exposed to serious winter conditions as their 1941 invasion of the Soviet Union dragged on, and naturally Luftwaffe pilots and crew had winter gear to combat the cold. Many pilots wore a leather jacket with fur collar; sentries, who would spend long stretches in the elements, were issued with heavy overcoats and thick leather and felt boots.

About the Kettenkraftrad
The trusty Kettenkraftrad half-track was a ubiquitous sight around German WWII troops, combining two tracks with the front wheel and steering mechanism of a motorcycle for superb off-road ability. Power was provided by a 36hp 1,478cc 4-cylinder engine that could propel the half-track at speeds of up to 70km/h, and allowed towing of loads up to 4.5 tons. The Luftwaffe used it to haul aircraft and shells, among other jobs.

About the Model
?This is a 1/48 scale plastic model assembly kit perfect for use in WWII dioramas. ?Contains parts for five Luftwaffe crew in realistic pose: two pilots in leather jackets, two mechanics and a sentry. ?Includes accessories such as stepladder, sentry post, fuel drums and more. ?With parts to recreate the Kettenkraftrad multi-purpose half-track vehicle. ?Great for dioramas with 1/48 scale aircraft subjects like the Focke-Wulf Fw190 and the Messerschmitt Bf109 G-6.
*Figures and accessories are a product of ICM, Ukraine.