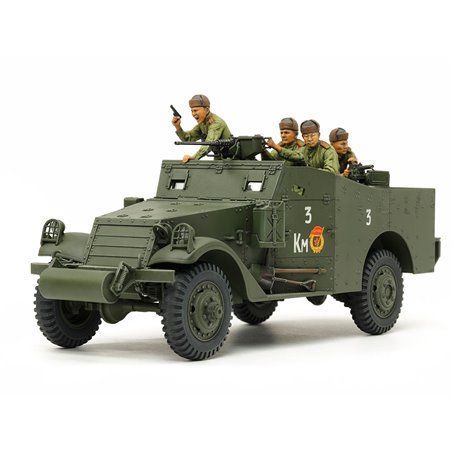 1939 saw the debut of the M3A1 scout car, which was an important facet of mechanized U.S. forces. This 4WD vehicle could get 80km/h out of its 87hp 6-cylinder engine, and packed a punch with one 12.7mm and up to two 7.62mm rail-mounted machine guns. It could hold 8 personnel, and was equipped with a front roller to help overcome obstacles, plus armor radiator louvers and armor windshield and side covers. Around 21,000 were produced, and deployed by U.S. forces in the Philippines, Tunisia, Sicily and more. Over 3,000 were also supplied to the Red Army under the auspices of the "Lend-Lease" program; Soviet forces used it in Mechanized and Tank Divisions, fulfilling reconnaissance, command car and even towing roles.