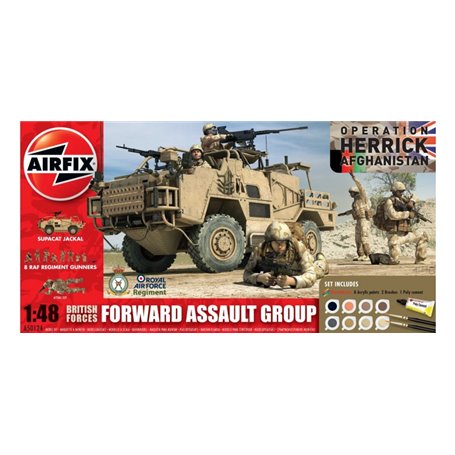 The RAF Regiment is an intergral part of today's RAF whose primary role is to protect the vital aircraft and airbases on operations around the world. The RAF Regiment was formed in 1942 and after over 70 years of constant operational service it continues to enable Air Power by defeating adversaries in close combat and aggressively defending the RAF's critical assets.

The key functions of the Regiment is to provide Force Protection command and control, ground combat, specialist training, chemical, biological, radiological, and nuclear defence and air land integration. The RAF Regiment uses a wide array of weapons, vehicles and specialist capabilities to provide a world leading Force Protection against ground attack, rocket or mortar fire and protecting aircraft from threats whilst in flight ir on the ground.

The Regiment provides personnel who are trained to direct Close Air Support from friendly aircraft, calling in air strikes in direct support of troops on the ground. It's fighting manpower can deploy anywhere in the world at short notice and is equipped with cutting edge light, medium and heavy weapons, including surveilance equipment, which enables them to quickly find and robustly deal with any threats encountered.

Please Note: The Driver, Passenger and 'Top Gunner' figures supplied in this set have been designed to fit the Airfix Jackal and Coyote. They can be made to fit into the Airfix Snatch Land Rover and WMIK, but they will require some modification in order to do so, therefore only modellers with some experience should attempt this.

Important: It is not possible to fully assemble the Driver, Passenger and 'Top Gunner' figures from this set and then fit them into a fully assembled Jackal or Coyote (or any other vehicle). The figures must be built up together, as indicated in the figure assembly instructions. Please read both the figure and vehicle instructions carefully before you start.