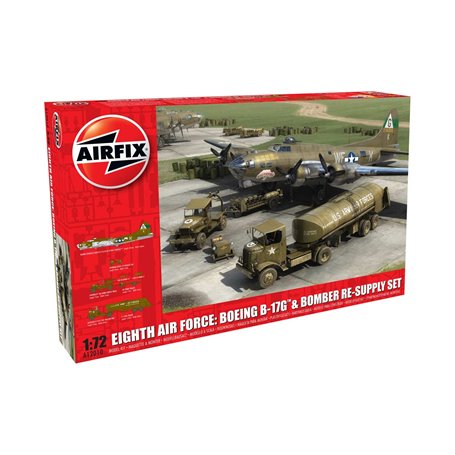 By late 1944 the Eighth Air Force’s air war over occupied Europe was at its height. Everyday hundreds of Boeing B-17 Flying Fortress and Consolidated B-24 Liberator bombers would head over German held territory, braving flak, German fighters and the weather to deliver bombs onto targets.

Damage to returning aircraft was commonplace which often led to the cannibalisation of badly damaged airframes to keep others flying. The silver port wing on the B-17G depicted in this kit is an example of this practice and it is a testament to the skill and hard work of the ground crews that so many aircraft were kept serviceable in this way.

Also included in this set are some of the ground vehicles vital to the refuelling and rearming of the bombers:

Autocar U-7144-T 4X4 tractor unit and F-1 fuel trailer. The U-7144-T was used extensively by the US military from 1942 onwards and was certainly found on most, if not all USAAF airfields in Britain, particularly in conjunction with the standard F-1 fuel trailer.

Chevrolet ® M6 bomb service truck and M5 bomb trailer. This utility 4X4 truck was capable of carrying a small number of bombs in its own right, but was more commonly used in conjunction with the M5 bomb trailer.