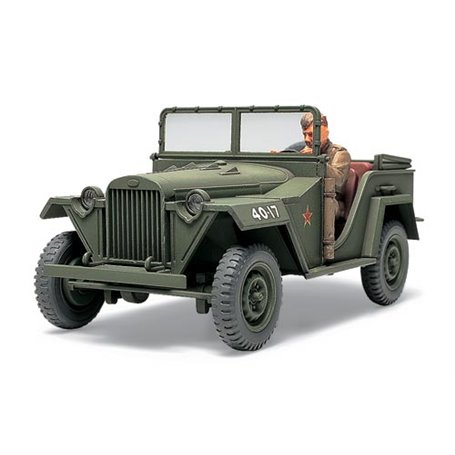 Tamiya continues to lead the charge on the 1/48 scale front, which has taken a firm foothold in the hobby industry. With all the different vehicle and aircraft diorama possibilities available for them, "soft" vehicles are widely sought after by modellers, and Tamiya is now proud to announce this Russian GAZ-67B field car to our lineup. Developed as a small liaison and reconnaissance vehicle along the same lines as the American Jeep, the GAZ-67B featured a 54 horsepower 3280cc 4-cylinder engine which allowed it to reach speeds of 90km/h. It proved to be a rugged vehicle with excellent off-road capabilities, and the over 60,000 produced were used by both the Russian forces as well as those of Warsaw Pact countries until well after the end of WWII.

?Perfect for depicting scenes on the Eastern Front and post-war examples in Warsaw Pact countries.