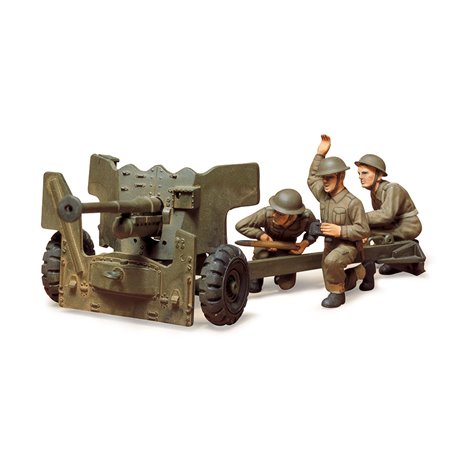 Old Reliable
The 6pounder anti-tank gun was a mainstay of British forces in WWII. Designed after the conflict broke out, it reflected British needs identified in the painful early contact with German forces. Remarkably, only a few weeks are said to have been needed to finalize the design, which almost gives lie to its highly effective performance. It was 57-caliber and had a maximum range of 5km, with a firing rate of up to 20 shells per minute, and a muzzle velocity of 815m/second, enough to threaten even Tiger Is. Forces in North Africa were the first to receive the 6pounder; later in the conflict, it would serve on all British fronts.

About the Model
?This is a 1/35 scale plastic model assembly kit. ?The 6pounder is recreated in style, and offers barrel traverse and elevation after completion. ?Trail can be opened and closed, allowing depiction as being transported by carriers. ?Three figures are depicted in action pose.