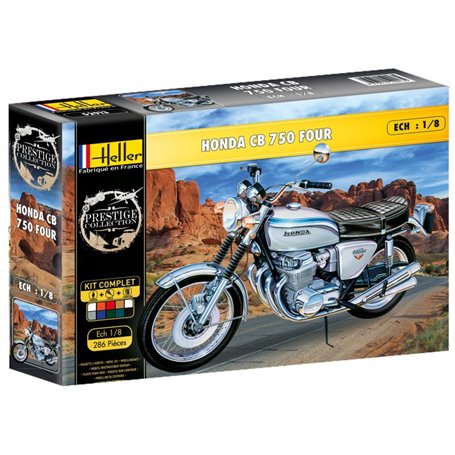 Four-cylinder, four-stroke, 4 carburettors, 4 separate exhaust pipes: presented at the Tokyo Motor Show in November 1968, and then in France in March 1969, the HONDA CB 750 Four, the first four-cylinder touring motorcycle, arrived on the market like a bombshell.
The K2 model proposed by HELLER was distributed in France as of January 1972.
Easy to start, powerful, excellent braking ability, able to travel at nearly 200 km/hr, no vibration or oil leaks, fitted with high quality equipment (meters, turn signals, signal levers, usable rear-view mirrors, etc.), and an impeccable finish, the CB 750 Four revealed itself to be a major road racer that could handle quite long distances running at cruising speeds near the top speed.
With mechanical systems that were practically unbreakable, whose reliability already shone through during the design stage, the model was able to satisfy the most demanding of users. Cyclists who drove long distances rapidly reached 100,000 km without any problem, with basic maintenance and in spite of high engine speeds for the era (red line at 8,500 RPM).
The qualities of the HONDA CB 750 Four placed it so high above other models that it became a mythic bike.