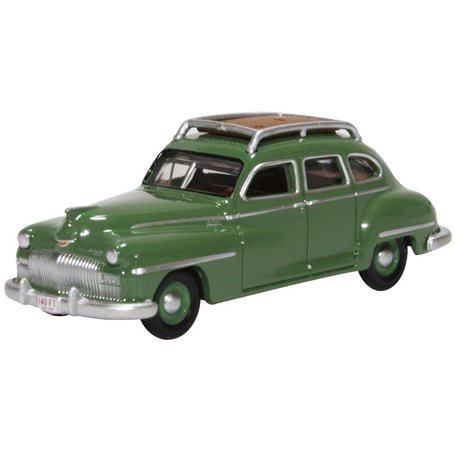 American Classic car DeSoto Suburban was first made in the USA post World War Two in 1946, modelled on the car manufacturer’s previous long wheelbase DeSoto cars. Also different from its predecessors, it had four doors and could seat eight people, which had great appeal for families and also provided an opportunity for use as a taxi cab. Weighing nearly two tons, the DeSoto was powered by a Chrysler inline 6 cylinder engine, promising a smooth ride for its occupants. Most DeSotos were fitted with a luggage rack at production stage, providing an additional luggage facility.

This 1946 version of the DeSoto Sububan in real life went on being produced until 1954. It is painted in an unusual green body colour with brown interior seating and steering wheel. The bumpers, large radiator grille, waistband and hub caps are trimmed in silver. As per the original, our model also features a roof rack finished in silver with brown slats.  It is registered in Ohio as 140 FT -1946.